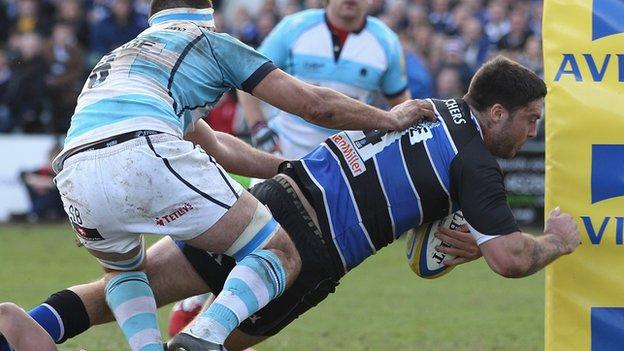 Bath hit back from an early Worcester try to comfortably beat the Warriors.

Tom Arscott touched down to put Warriors ahead before Tom Biggs, Matt Banahan and Michael Claassens all went over for Bath before the break.

The hosts' dominance continued in the second half as Claassens notched his second score of the afternoon.

Miles Benjamin reduced the arrears but a breakaway effort from Biggs sealed Bath's bonus-point win which puts them eight points ahead of Warriors.

After a strong start from Bath it was the visitors who drew first blood as Arscott crashed over after good hands from Chris Pennell.

Andy Goode kicked the extras but two converted tries in quick succession turned the contest around.

Biggs pulled Bath back into it after he capitalised on a line-out and Banahan made the most of a disguised pass by Francois Louw, with Tom Heathcote converting both.

Claassens forced his way over after sustained pressure and Heathcote converted his third of the day as Bath began to make their superior league standing show.

Goode landed a penalty shortly before half-time to make the score 21-10 at the break.

The second half started in scrappy fashion but, after Banahan had a try ruled out, Claassens crossed for his brace after a strong scrum from the hosts.

Worcester scored their second try of the day when Benjamin went under the posts after good play by Blair Cowan, with Danny Gray scoring the extras.

A Heathcote penalty and a brilliant break away score by Biggs put some gloss on the result in the dying minutes.

Rookie fly-half Heathcote, 20, who kicked four conversions and a penalty, is understudy to All Black Stephen Donald, who is currently ruled out by a knee ligament injury and may not be back until early April.

But, although Heathcote is still an academy player, having only recently signed a three-year deal with the club, Bath coach Brad Davis warns that Donald is not going to walk back into the team.

"Stephen Donald's going to have to fight his way back into that number 10 shirt. The guy who's there at the moment is going from strength to strength and learning the game. The crowd here at The Rec know their stuff and when Tommy's on the ball they get excited about what he does. He's a good player.

"He has the skills, the passing game, the kicking game, but he's brave too in the way he takes the line on and also in defence. But he's got his feet on the ground and he's a terrific guy to work with."

"We took them apart physically. We're evolving strongly as a unit now."

"It looks like it's one game too far. We've put a huge effort in for the last five games. But the danger after Saracens was that we might think that the job was done.

"We've had a really tough, intense period since Christmas and the tank's a little bit drained. We started brightly but we ran out of a little bit of steam and the intensity wasn't at our usual level. Consequently, the defence was under huge pressure.

"The mind was willing but I could see it was going to be a dangerous one. Bath are one of the top three teams on form. It was good to secure the second try. We had a little bit of consolation there, but for some reason our set piece didn't function as it usually does."