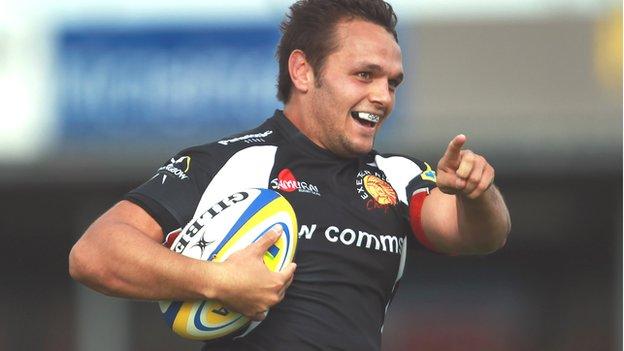 A dominant first-half display from Exeter helped them to a comprehensive bonus-point victory over Sale Sharks.

Phil Dollman crossed over for the Chiefs before Ignacio Mieres landed two penalties to add to their lead.

Richard Baxter's try, converted by Mieres, made it 18-0 before Nick Sestaret and Matt Jess finished off fine moves to extend the lead.

Late tries by Luther Burrell and Tony Buckley reduced the deficit but Chiefs then claimed a late penalty try.

The result means the Chiefs have done the double over Sale this season as well as keeping up the pressure up on the Heineken Cup places.

Chiefs went ahead when Dollman latched onto Jason Shoemark's pass to squeeze in at the corner.

Mieres missed the conversion from a tight angle but kicked two penalties to increase the lead before Baxter found a small gap following a scrum and crashed over for the hosts' second score, Mieres kicking the extras on this occasion.

A wonderful passing move was completed by replacement Sestaret after the break before Baxter was sin-binned for a professional foul.

Sale were unable to take advantage of their numerical advantage and fell further behind when the Chiefs scored a bonus-point winning try through Jess, who went over after a neat pass inside from Dollman.

Burrell finally put the Sharks on the scoreboard when he went over after concerted pressure from the visitors and Exeter were forced to close the game out a man light when replacement prop Ben White was yellow carded.

Buckley added a second consolation try when the Chiefs held the ball at the back of a ruck over their own line and referee Dean Richards deemed the ball was out, allowing him to claim the touchdown, which Nick Macleod converted.

The Chiefs had the final say though when they were awarded a penalty try after a succession of scrums under the posts, Gareth Steenson kicking the extras.

"Not many talked about how well Exeter played for the last 60 minutes up there to come away with a win. So we felt that we had a point to prove and we wanted to show that we could score tries.

"We are a good rugby side, we have got ambition, we are looking up the table and hunting things down rather than worrying about other stuff. We showed that in this game.

"We are aware that we have had some tight games recently but the reality is that in the last three games we have scored one try but only conceded one try; they weren't high-scoring, big-tempo games.

"Fourteen points from four games is pretty good going, it is above our target slightly, we felt that we had the opportunity to get around 12 points. We are moving in to the business end of the season now with one our best, energetic performances."

"There are no arguments or excuses from us on the result because they truly deserved what they got and they were better than us in all aspects of the game and deserved their win.

"We didn't start well but the wind was significant and if we had gone in the break 11-0 down there was an opportunity to regroup and try and sort some bits of our game and get some ball in play because it was quite stop-start.

"But at 18-0 that was going to make it tough against a pretty good side. Then we were guilty in the opening stages of the second half of trying to put everything right but we let them score again and it was effectively over as a contest.

"We had a couple of nice moments but they were very much a consolation. We felt that we had been playing very nicely over the past three weeks, we've played some good rugby and probably rained the best in the past week.

"The motivation was high, considering what happened at our place and we got beaten. So we need to go away and regroup but the worse thing for us is that we don't play for three weeks and that makes it really hard."