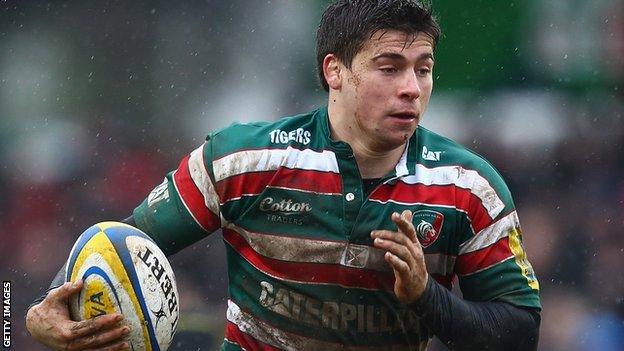 Leicester Tigers cruised to victory over Gloucester on a mudbath of a pitch at Welford Road.

After Freddie Burns slotted a penalty for the Cherry and Whites, the hosts responded with unanswered tries from Logovi'i Mulipola, Steve Mafi and Ben Youngs before the break.

Tigers secured their bonus point when Matt Smith touched down after getting on the end of a neat grubber kick.

Alesana Tuilagi ran in a fifth try after intercepting a Gloucester kick.

Burns kicked Gloucester into an early lead but, in truth, they rarely looked like upsetting the odds and their lead was short-lived.

Tigers went ahead when Mulipola forced his way over amidst a crowd of bodies, Toby Flood kicking the first of his four conversions.

Leicester's next try owed much to the creativeness of flanker Mafi, who won a line-out before surging through a gap in the visitors' defence to slide in.

After Flood kicked a penalty to add to their advantage, Youngs broke through three poor tackles to cross, giving the hosts a commanding half-time lead.

It took until almost 20 minutes in the second period for the Tigers to add to their score, Smith racing through to ground a lovely grubber kick from Gloucester-bound centre Billy Twelvetrees.

Tuilagi got his name on the scoresheet when he intercepted Jonny May's kick 20 metres from the Tigers line and powered his way almost the full length of the field.

To their credit, Gloucester kept pushing for a consolation try but the home defence stood firm.

"The pressure was on us today - we probably had to win more than Gloucester did.

"It shows that if you have the right mental focus, you can turn things around pretty quickly, and I didn't feel that Gloucester were at the races against us.

"We knew that if we matched them physically, and with the weather conditions like they were, it would probably suit us more than them."

"We were well and truly beaten. You have got to turn up and do the basics, but our basics weren't good enough.

"Mentally, we didn't turn up. It does not mean you are a bad team, but we have lost to a side that has always thrived in conditions like that.

"There were some harsh words said at half-time, and we will take the criticism. I want to know why we didn't turn up, mentally."