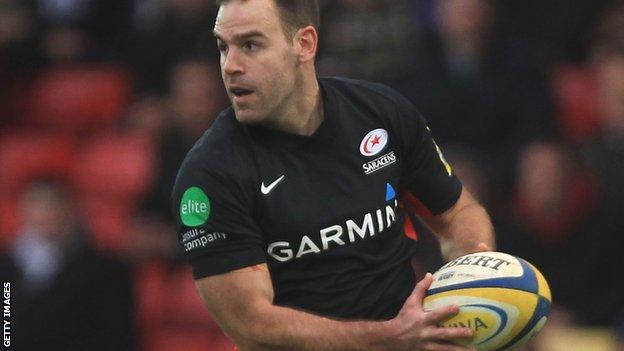 The first half saw Hodgson exchanging kicks with Saints fly-half Stephen Myler, Hodgson coming out on top as Sarries led 9-6 at the break.

Hodgson added three more to his tally in the second period to give his side the victory.

Myler missed his first chance to get on the scoreboard early on but kicked his side ahead after Sarries were penalised for pulling down a maul.

The hosts equalised, going in front thanks to the boot of Hodgson who twice punished Saints for tackling infringements.

After Myler levelled following an offside call against Sarries, Hodgson sent the hosts in with a lead after Roger Wilson's tackling misdemeanour.

He added a quick double after the break, the second a tremendous effort from long range.

Myler pulled Saints back into it with his third penalty, only for Hodgson to continue his 100% record to effectively put the game beyond the visitors on a day when try-scoring chances were at a premium.

Lamb's 79th minute effort at least gave a losing bonus point to Northampton, who will rue too many missed kicks from Myler.

"Charlie Hodgson was outstanding. His place-kicking was exemplary and his game-management tremendous, particularly when we came under pressure in the first half.

"All Charlie can do in terms of England selection is what he did, perform to a high standard.

"He has got himself back in contention for the England squad and England now have a decision to make with both Charlie and Toby Flood fit again and available.

"I am really chuffed for the club because we are still in second place in the table and now we go to Abu Dhabi for a short break and to freshen up."

"Charlie Hodgson kicked everything that came his way, Stephen Myler was less accurate on the day, but we did take home a losing bonus point.

"We got forward dominance early on but then Saracens came back strongly. They are a quality squad and you expect nothing less there.

"It is interesting to see how players react when they return from time with the England squad. And we are still in the top four and looking forward to playing in the LV=Cup semi-final next weekend.

"I believe it is important to keep playing rugby, so I'm glad we don't have a break coming up."