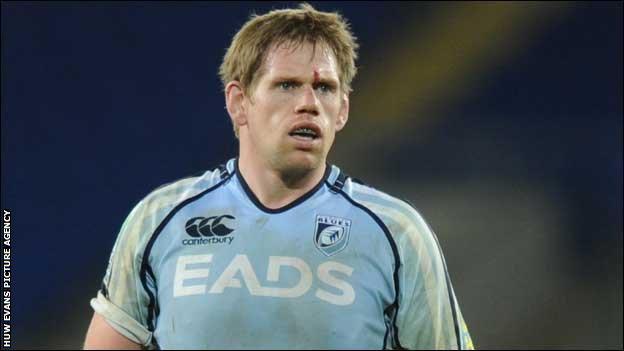 Former Wales hooker Rhys Thomas will leave Cardiff Blues for Dai Young's Wasps at the end of the season.

Thomas, 29, follows Dan Parks, and Casey Laulala out of the Welsh region while flanker Martyn Williams is set to leave in the summer.

"I am really looking forward to linking up with Dai Young again who has been a big influence to me in my career and I'm excited by the challenge of playing in England with London Wasps," Thomas told the Wasps website.

"Like most professional players I always keep an eye on how the game is going in England and it's the kind of challenge that I know I will relish."

Young, who was a Blues coach for nine years before joining Wasps, added: "I obviously know Rhys very well having coached him for many years, and he will be a real asset to our squad next season.

"He is an experienced international and exactly the kind of quality player we want to bring to the club."

Welsh club rugby is suffering an exodus of players joining rival leagues as the Blues, like Wales' other three regions, have to adjust to operating with a £3.5m salary cap from next season.

Thomas has been at the Blues since the region's formation and advent of regional rugby in Wales in 2003.

The front-rower is the Blues' first-choice hooker and with Gareth Williams' retirement, his departure leaves Ryan Tyrrell, Marc Breeze and Rhys Williams as the Blues' hooking options from next season.