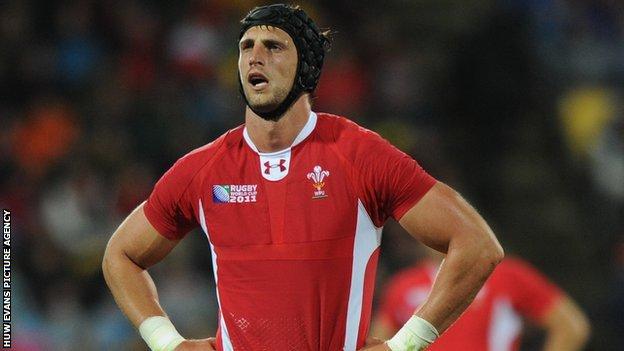 Luke Charteris says he will be available for all Wales commitments after he leaves Newport Gwent Dragons at the end of the season.

The Wales lock, 28, is expected to join Welsh fly-half James Hook at Perpignan.

Charteris insists his new employers will give him "full release" for Wales playing and training squad duties.

"If I'm called on I'll be available for all Welsh training and for Welsh games because that's massively important to me," said Charteris.

In doing so, Charteris has fallen in line with Wales coach Warren Gatland's wish for any players based elsewhere to ensure their contract allows them to fulfil all international commitments.

That has not been the case with some players in the past, with issues over release of players based in England and France for some games and training sessions.

Charteris joins fellow Welsh internationals Huw Bennett,Aled Brew,Rhys Thomas, in heading out of Wales while Hook, Lee Byrne and Mike Phillips are already plying their trade in France and Craig Mitchell is at Exeter.

Wales tight-head prop and centre Jonathan Davies, however, have resisted the temptation to follow suit, re-signing with the Ospreys and Scarlets respectively.

"It's the right time personally for me to go," said Charteris.

The 6ft 9in, 20st 4lb player starred at the 2011 World Cup where Gatland described him as the nation's leading lock.

However, Charteris says his only realistic option within Wales was to remain at the Dragons

"The only option I have is to stay at the Dragons, which is great, or to move abroad," said Charteris.

"There were no other options to [move to] another Welsh club and to be honest that's probably not something I would have looked at and wanted to do anyway.

"In terms of marrying that with international ambitions, it's down to the individual player.

"I've sort of worked very hard to make sure that where I'm going, they've given me full releases so that as long as I'm playing well and I'm putting myself out there performance-wise, that if I'm called on I'll be available for all Welsh training and for Welsh games because that's massively important to me."

Charteris, who has not played since the World Cup, could return from a wrist injury for the Dragons in their Pro12 clash against Munster on Saturday but he doubts a Six Nations call-up is imminent.

Having won a Triple Crown, Wales host Italy on Saturday 10 March and hope success in that game will lead to a Grand Slam clash against France in Cardiff a week later.

Charteris said: "It's probably going to be too soon, but you never know. I was told I wouldn't be playing until April time... I've just got to go out on Saturday and see how it goes and see where I am.

"It's really hard to judge yourself in training.

"Until you get into a game you don't really know where you are in terms of fitness, in terms of skill and just getting all of those sort of things back."