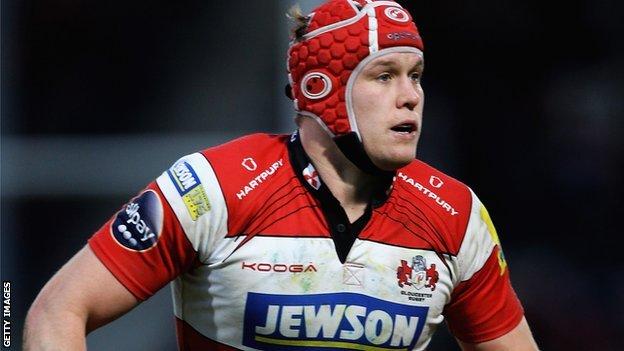 Gloucester captain Luke Narraway says his decision to sign for Perpignan came after his contract negotiations at Kingsholm broke down.

The 28-year-old back rower has agreed to join the French Top 14 club for next season, bringing to an end his 10-year stint with the Cherry and Whites.

"For one reason or another talks broke down," he told BBC Gloucestershire.

"I had to go and look to see what was on offer. Once Perpignan got in touch, it was an offer I couldn't turn down."

He continued: "It's something I've always looked to potentially do. The atmosphere in the games over there are second to none.

"I've been here 10 years and I'm getting on a bit now. I said if I ever decided to move it would be something like this - a dramatic culture change. Hopefully I can go there and buy into the way they do things."

Narraway has made 160 appearances for Gloucester and has also received seven England caps, although he has not played an international game since 2009.

Despite his lack of opportunities with the full squad in recent years, Narraway consulted head coach Stuart Lancaster about his move to France and his future as part of the England set-up.

"I would never retire from playing for England. I've had a conversation with Stuart and he gave me his blessing for the move and understood my reasons," he added.

"Obviously it makes it a little bit more difficult as they will be watching the Premiership but he said I wouldn't be out of the mix."