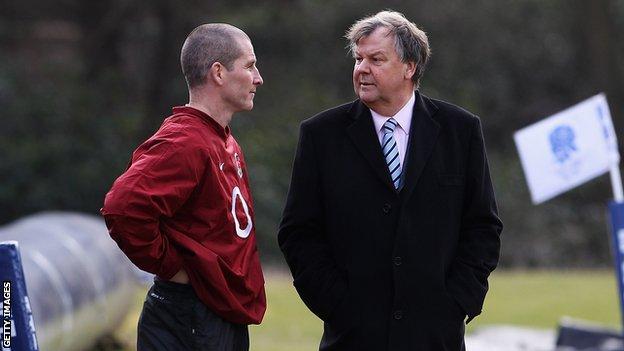 Interim England coach Stuart Lancaster will be interviewed to become Martin Johnson's permanent successor before the end of the Six Nations.

"It is helpful to be able to do that so we can move the process on," he said.

Sir Ian McGeechan, Conor O'Shea and Richard Hill will join Ritchie and Rob Andrew on a five-man panel which will advise the RFU board.

"Ian Ritchie's first public appearance as RFU chief executive was sure-footed. He proved himself a straight-talker, and clear about his objectives. There may be eyebrows raised at his inclusion of Rob Andrew on the 'advisory panel' to appoint an England head coach. Part of Andrew's remit is to ensure the promotion and growth of English coaches, so he might be unlikely to endorse the claims of a foreigner. His department is also set for a fulsome independent review."

Lancaster is the only candidate to confirm he has applied for the role, although Nick Mallett, Eddie O'Sullivan and John Kirwan have all been linked to the job.

"We have tried to do it at a time that is most convenient to Stuart," Ritchie continued.

"I appreciate it puts more pressure on Stuart because he has the day job to be getting on with.

"Timetable-wise I would hope, believe, we should be in a situation to do it [make an appointment] towards the end of the Six Nations."

Ritchie has targeted having the new man in place before England's June tour of South Africa.

He added he would be prepared to wait until as late as October if that was necessary to secure the right man.

The former England Saxons coach has appointed Harlequins' Chris Robshaw as captain and introduced a raft of new faces to the squad.

He has overseen all three of England's Six Nations game, registering wins against Scotland and Italy, plus last Saturday's 19-12 defeat by Wales.

England play France on 11 March and finish their Six Nations title defence against Ireland on 17 March.

"I think Stuart has done a fantastic job," Ritchie said.

"He was in a very difficult position but has done a lot of the things that we would all agree are the right things to have been done. If you talk to him, he's an impressive person.

"What Stuart has undoubtedly done is, by the strength of what he's achieved, put himself on the list. But how does he compare with other people on the list? Selection is all about comparisons."