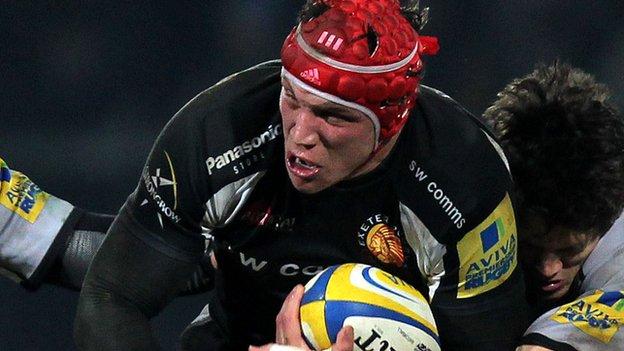 Exeter flanker Tom Johnson says he and his teammates will be wary of Sale wanting revenge when they come to Sandy Park in the Premiership on Saturday.

Exeter reversed a 20-point deficit to beat Sale 30-23 back in November.

"They're a quality side and they felt they let us off the hook and I'm sure that kind of second half performance won't happen again," Johnson said.

Sale have never beaten Exeter since the Chiefs were first promoted to the Premiership in 2010.

"We were 20 points down at half time and for the boys to dig deep and come back showed a lot of character," the England Saxons flanker told BBC Radio Devon.

"They've put in some really good performances recently so I think they'll come down here and really put the game on us," he added.

Exeter have scored just one try in their last three matches, but Johnson is not concerned by the lack of scores.

"We always try and play to score tries, it just happens we played Leicester a couple of weeks ago and they've got a great defence, and then we were away at Wasps in horrendous conditions.

"Perhaps we were looking to score one or two against Bath and that didn't happen but I'd happily rather take a win than score points to be honest," he said.