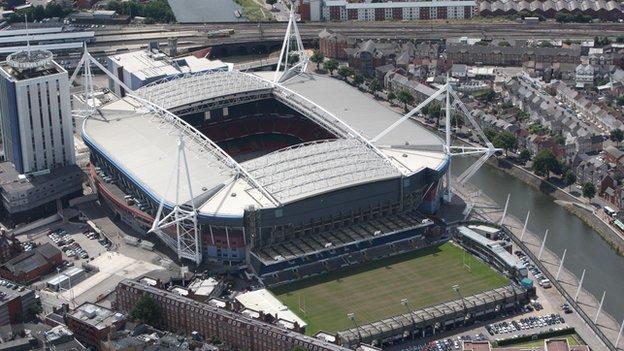 Wales have been told they are unlikely to be allowed to host top nations at the Millennium Stadium at the 2015 Rugby World Cup.

The tournament is being hosted by England, whose bid included playing up to eight matches in Cardiff.

Tournament chief Paul Vaughan said: "We will make sure that Wales get the same treatment as any other team.

"And if Wales are playing a tier one country in their pool, we will probably play it away from Cardiff."

The Welsh Rugby Union were keen for all of Wales' pool matches at the World Cup to be played at the Millennium Stadium.

But BBC Wales Sport understands opposition to Wales hosting games against top-ranked nations in Cardiff has grown within the southern hemisphere.

"It's a huge tribute and compliment to where Wales are at the moment on the field and I think we should embrace that position, we should smile at it and we should face up to each game as it comes along."

Wales finished fourth at the 2011 tournament, their strongest World Cup showing since clinching third place in 1987.

That has been followed by a 2012 Six Nations Triple Crown and Warren Gatland's side lie fifth in the current International Rugby Board rankings as they set sights on a Grand Slam.

New Zealand, the 2011 World Cup winners, Australia, France and South Africa are above Wales in the international league table.

If Wales were to host six 2015 pool matches, plus two quarter-final games in Cardiff, it would give the WRU an estimated rental income of around £10m.

Former Rugby Football Union chairman Martyn Thomas was at a meeting during the 2011 World Cup where arrangements for the 2015 event were discussed.

He told Friday's Sport Wales programme: "I was at the IRB meeting, certainly in New Zealand, and I don't recollect any concern being expressed in the meeting from the southern hemisphere in relation to the use of the Millennium Stadium.

"I'm aware that there are rumours going around that since Wales' rugby revival that there were concerns that this would be an unfair advantage."