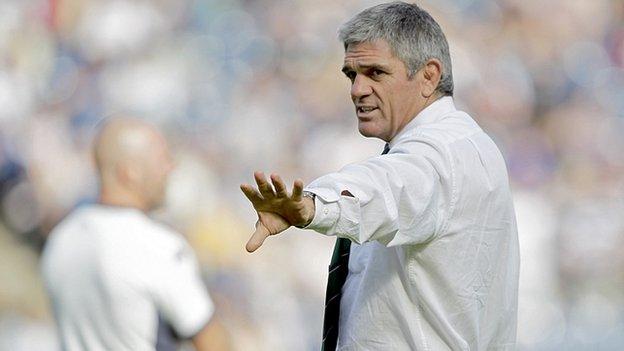 John Kirwan backed Nick Mallett to be England's next full-time head coach after being told by the Rugby Football Union's head-hunters he is not experienced enough to be considered.

Kirwan has coached at three World Cups with Italy and Japan but conceded his appointment would have been a risk.

That Kirwan is considered inexperienced suggests interim coach Stuart Lancaster will not remain in the role.

"I think Nick Mallett would be perfect for it," said All Blacks great Kirwan.

"They [head-hunting firm Odgers Berndtson] contacted me saying I wouldn't go on to the next stage because they had a couple of other candidates that had more international experience than me.

"They were looking for someone with a higher international profile. I understand that."

Kirwan, 47, says he was told there were two candidates who met the RFU's criteria, likely to be former South Africa and Italy coach Mallett and ex-Ireland boss Eddie O'Sullivan.

Nick is the ideal mix," said Kirwan. "He is highly intelligent, he understands what a team needs to win and he gets the best out of players.

"It will be a high-pressure situation [coaching England] into a home World Cup [in 2015]. I think Nick would be a great candidate for the job."

The RFU will conduct interviews - including one with Lancaster - over the next three weeks, with a view to making an appointment before the end of the Six Nations.

The England Saxons coach was put in charge of the senior side for the Six Nations - his first international coaching role - following in November.

Under Lancaster, England won their first two games in the Six Nations before narrowly losing to Wales at Twickenham last weekend despite an encouraging performance.

"Stuart so far has been saying and doing all the right things. So far he has been good," said Kirwan. "I think it is between those two [Lancaster and Mallett].

"The RFU will need to be cold about it and assess who will be the right guy to lead the side through to your own World Cup and not make the mistakes of a debutant.

"How many times did it take Clive Woodward and Graham Henry to win the World Cup? Two each.

"I am the most experienced World Cup coach there is and I know it like the back of my hand. I thought that might give me a bit of an 'in' but it was always a long shot."

Mallett led the Springboks to the semi-finals of the 1999 World Cup before enjoying club success with Stade Francais and spending four years in charge of Italy.