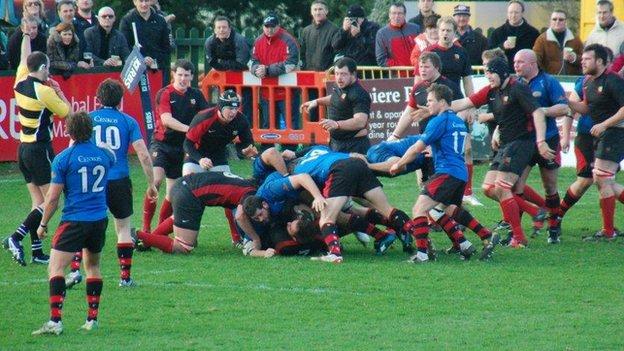 National One leaders Jersey battled back from behind at half time to beat Blaydon 28-7 at St Peter.

Blaydon were 7-3 ahead at the interval after fly-half Andrew Baggett touched down.

But, in a stunning start to the second half, Steve O'Brien, Glenn Bryce and Ashley Maggs scored tries within 12 minutes to put Jersey back on track.

Ed Dawson went over in stoppage time to clinch the bonus point and ensure the islanders stay eight points clear.

"The boys recognised in the first half that we didn't play with much width," said Jersey director of rugby Ben Harvey.

"We had to sort out some defensive issues and we defended with a bit more passion. As a result, we got a great second-half performance."

Jersey's promotion rivals Ealing Trailfinders and Fylde both grabbed bonus-point wins of their own to keep up the pressure at the top.

The injury-hit islanders, searching for their fourth promotion in five years, have now won 18 games in a row.

Blaydon remain in mid-table, well clear of the relegation zone.