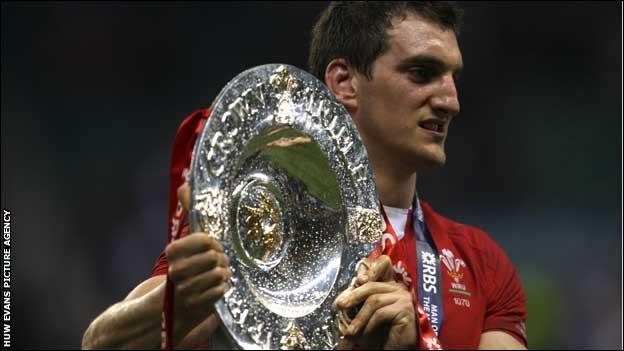 Sam Warburton has urged his side to be "ruthless" against Italy on Saturday to warn France that Wales are "not messing around" in their 2012 Grand Slam bid.

Only Wales can win a Grand Slam by holding them to a 17-17 draw in Paris.

Wales are unbeaten against Italy at The Millennium Stadium and Warburton wants his side to send a message to France.

"It is about being ruthless next weekend," said the Wales captain.

"It's a great opportunity to send a message out to France that we are not messing around.

"A good impressive win over the Italians and trying to get some negative thoughts in their mind coming to Cardiff means a ruthless performance against the Italians would be good."

Championship leaders Wales won away in Ireland and England either side of a comfortable home victory over Scotland.

Their victory in Twickenham on 25 February earned Wales a 20th Triple Crown and Warren Gatland's side are targeting third Grand Slam in seven years.

If you go out a bit complacent and they [Italy] get their tails up - they beat France last season, remember - they have that performance in them

And Warburton is cautious about being swept along on a tide of expectancy and the general assumption that Italy will provide little threat ahead of the game against France at the Millennium Stadium on 17 March.

"I can understand how people are getting ahead of themselves," said the Cardiff Blues flanker.

"But from a player's point of view it is always a really tough game against Italy, and the players know that, which is why we are really going to knuckle down at training.

"I have stopped myself from saying it [Grand Slam]. I am not superstitious, but I can say hand on heart that no one has spoken about the French game once.

"It is just being professional. At the moment, it is about getting your body right for next weekend, topping up some fitness, doing some skill work and then focusing on Italy.

"We can't afford to think of anything else, really, and the players won't be looking any further ahead than Italy.

"When I have played against Italy, even though it might look comfortable from a spectator's point of view, you still have to work really hard on the pitch.

"You really have to try to break them down. If you go out a bit complacent and they get their tails up - they beat France last season, remember - they have that performance in them.

"Things, at the moment, seem to be going our way.

"We got the ball rolling with that win out in Ireland, and every week we come in and everyone is positive and confident, which makes a massive difference to when you are training.

"If anything, you train even harder because you want to succeed even more."