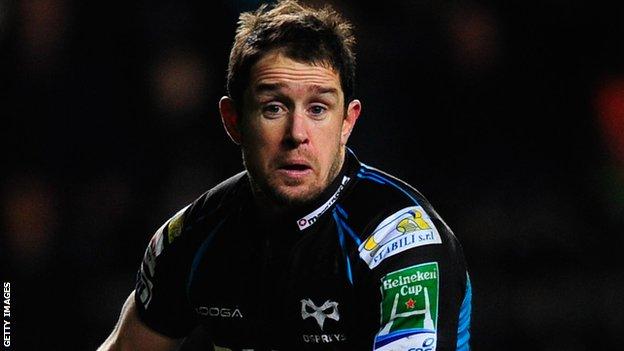 Wing Shane Williams has revealed he is likely to play only one more game for the Ospreys before retiring.

Williams, 35, has not featured for the region since January's defeat against Biarritz.

He will retire at the end of the season, having already quit Wales.

"Me and Steve [Tandy, Ospreys head coach] had a chat and basically I don't want to take the place of the likes of Hanno [Dirksen], Eli [Walker] and any other guys," said Williams.

"It's about time we brought them through and give them some game time and that's what we're doing at the moment.

"It's a decision me and Steve had obviously knowing that this is the end of my professional playing career now.

"It's not over for me and I'm ready to play. I'd play now if they asked me. I think I'll be playing in the Dragons game at home in several weeks time.

"But it's my place now just to help the likes of Eli and these guys coming through and make sure they're prepared for professional rugby at top class."

Ospreys face Newport Gwent Dragons in a Pro12 League game at the Liberty Stadium at the end of April.

Williams rejected an offer to extend his contract until the 2012-13 season, but has accepted take up an "ambassadorial" role with the region once he retires.

Wales' record try-scorer has also expressed a desire to become a coach and has already worked as a pundit for the BBC during the Six Nations.

His final appearance for Wales came in December 2011, scoring a try in the 24-18 defeat against Australia.