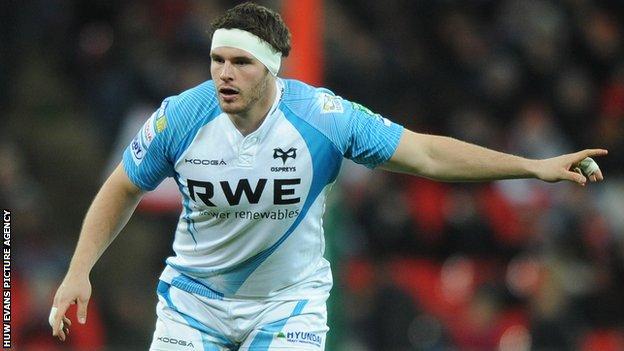 Wales prop Ryan Bevington has committed himself to the Ospreys until the end of the 2013-14 season.

The loose-head, 23, has won seven Wales caps having made his debut in their June 2011 defeat by the Barbarians at the Millennium Stadium.

The former Bridgend and Aberavon prop made his Ospreys debut in 2008 and has since topped 50 regional appearances.

"Hopefully I'm going to get more game-time," said Bevington. "Then I want to help the Ospreys win more silverware."

He added: "So much has happened to me over the last 12 months and I've been fortunate enough to get some great experiences.

"With the contract signed I'm looking forward to hopefully challenging for a starting place and playing more for the Ospreys as I get more experience."

Bevington's decision comes in the wake of tight-head Adam Jones' recent deal to also remain at the Ospreys until the end of the 2013-14 season.

Securing the Porthcawl-bred player's services is also a boost as Wales hooker Huw Bennett is joining Lyon,Ireland wing Tommy Bowe is poised to return Ulster, Scotland wing Nikki Walker is off to Worcester and flanker Tom Smith has signed for London Irish while Shane Williams retires at the end of the season.

Ospreys forwards coach Jonathan Humphreys said: "Ryan is one of the brightest front-row prospects in rugby at the moment so it's great news that, after reaching international prominence, he sees his future here with his home region.

"He has all the attributes to develop into a world-class prop if he continues working hard on and off the pitch.

"He's represented himself and the Ospreys with distinction at every stage of his young career, but the next two years are very important to him as he looks to make the next step."