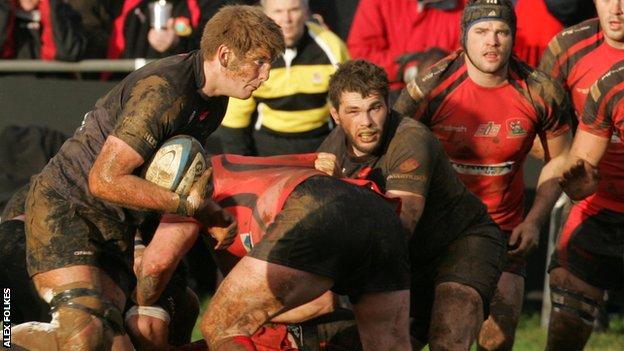 Launceston's playing squad have been forced to take a pay cut after a drop in the club's income.

It is the second time the club have faced financial problems after being docked 20 points in August 2010 for going into voluntary liquidation.

"The gap between income and expenditure coupled with the wider economic down-turn has had a major detrimental effect on income," said a club statement.

It follows local rivals Redruth, who also had to cut wages this season.

"We have decided that it is crucial to be proactive rather than reactive and we will therefore be reducing the players' wage budget between now and the end of this season," the statement added.

But captain Tom Rawlings told BBC Radio Cornwall that the players are not happy at having to take another pay cut.

"When you get promised last year that there's going to be no cuts this season, guys feel they're comfortable and feel they're secure, but they've had the wages cut despite what was said."

But the club says the move is necessary to ensure that rugby remains at Polson Bridge.

Launceston were relegated from National One last season as a result of their 20-point deduction and the club says their wage bill was set with the aim of going straight back into the third tier of English rugby.

"The future of your club is of paramount importance and we must adhere to the ruling of The Rugby Football Union following the previous club's insolvency.

"We must also be able to maintain strict control of our finances and the goodwill of our suppliers and sponsors.

"During the course of season 2011-12, club income has not met with our expectations. Our playing budget was set with a mind to progress successfully in National League Two South. We are currently in eighth position," the statement added.