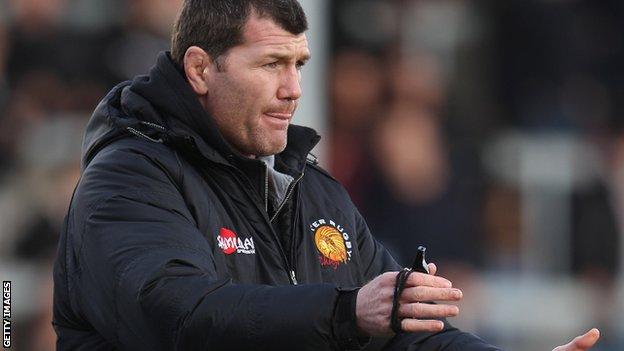 The victory, which was their biggest since promotion to the Premiership in 2010, puts fifth-placed Exeter four points clear of Gloucester.

"It was fantastic. The boys walked out onto the pitch and you could tell by their body language that it was going to work," Baxter told BBC Radio Devon.

We played with ambition as a team and individually, and as a group we created a lot of match-defining moments

Exeter now have a fortnight off as they aim to cement a Heineken Cup place.

"I'm rarely confident before a game, you always think there are so many things that could happen," Baxter said.

"But looking at the guys in the changing room and the way they warmed up they had a bit of steel in them.

"We wanted to prove a few points about Sale. I think the build up to the game had all been about how Sale had let a game slip away up there, that they should never have lost.

"We said, 'we know we didn't start well up there, let's get at them from the first minute, let's make sure people are talking about Exeter's attacking game'.

"I think we really took that on board, the players played with ambition as a team and individually, and as a group they created a lot of match-defining moments," Baxter added.