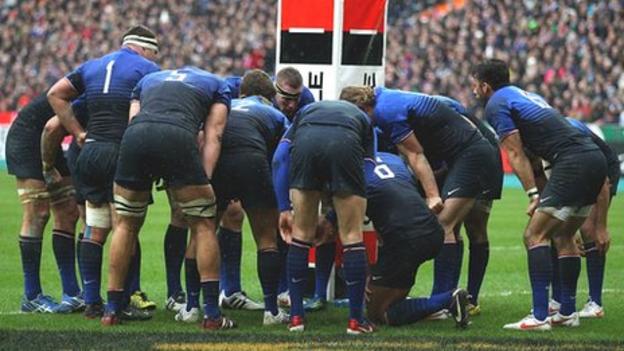 France have named an unchanged squad to face England in the Six Nations at the Stade de France on Sunday.

French hopes of a Grand Slam were ended by a 17-17 draw with Ireland in Paris, but coach Philippe Saint-Andre has kept faith with the same 23-man party.

"It was only a draw but it was our best performance since the start of the Six Nations," said Saint-Andre, who will name his starting XV on Wednesday.

"Statistics showed that we dominated but did not win."

France were lacklustre in the first half against the Irish and trailed 17-6 at the break after two Tommy Bowe tries.

However, Les Bleus battled back in the second half with Wesley Fofana crossing and Morgan Parra landing two more penalties to secure the draw.

Saint-Andre's side are second in the Six Nations table, one point behind Triple Crown winners Wales with two games remaining. England are third, one point further adrift, following their 19-12 defeat by Wales at Twickenham on 25 February.

"We can still win the tournament," added Saint-Andre. "And we will prepare for a big match against England."

Scrum-half Dimitri Yachvili, who suffered a back problem early in February, had been tipped for a recall but Saint-Andre opted to stick with Julien Dupoy as back up to Parra.