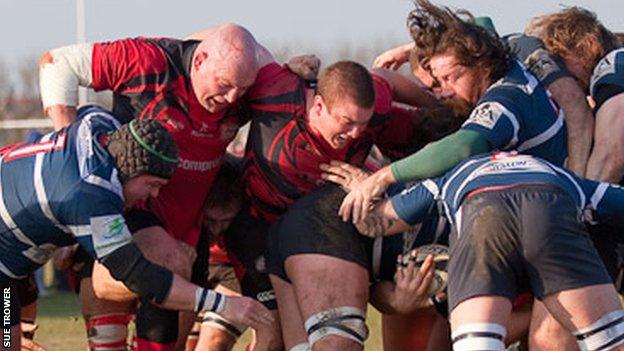 Jersey player-coach Ben Evans has hailed the character of the club's island-born players.

Jersey have brought in a number of squad members from the UK but have also developed a clutch of home-grown first team members.

Evans praised forward Toby Clyde-Smith after his showing in the 28-7 win over Blaydon, his first game of the season.

"I'm just so pleased for the guy, he's worked so hard," he told BBC Radio Jersey.

"Pre-season training last year he injured his ankle and ended up with a bad infection.

"He's another Jersey boy that's got something about him, a bit of guts, a bit of burn in the belly.

"It was just great to see all the hard work that he's done and he's back on the pitch, that's where we all want to be as rugby boys."

Jersey have seen Michael Le Bourgeois, Dave Felton, Myles Landick and Ed Dawson come up through the ranks and establish themselves in the squad.

"You've someone like Ed Dawson who's a Jersey boy and is playing out of his skin at the minute," Evans added.

Jersey are still eight points clear at the top of National One with six games to go.