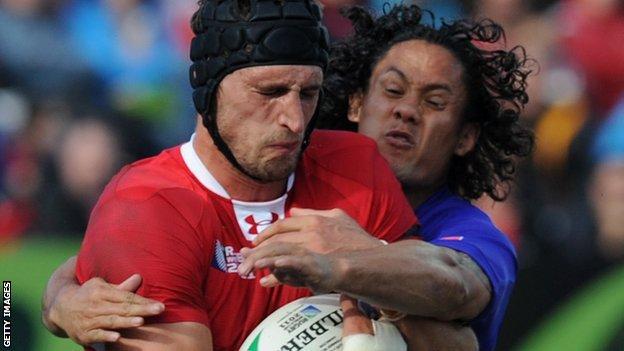 Luke Charteris has been added to the Wales squad ahead of Saturday's RBS Six Nations clash with Italy in Cardiff.

The lock, 28, returned to action for Newport Gwent Dragons on Saturday in their Pro12 24-14 defeat at home to Munster after a long-term wrist injury.

The 6ft 9in, 20st 4lb player had been sidelined with the problem since the end of the 2011 World Cup.

That win secured the Triple Crown for Wales and keeps Warren Gatland's side on course for a third Grand Slam in eight years, if they can beat first Italy and then France at the Millennium Stadium.

Centre Jamie Roberts remains an injury doubt for Saturday's game against the Azzurri, having limped off at half-time against England with a knee injury.

Should the 2009 British and Irish Lions star be ruled out, Gatland is likely to start with Scott Williams - who scored the winning try after coming off the bench at Twickenham - alongside his Scarlets team-mate Jon Davies.

Full-back Leigh Halfpenny took a heavy blow to the head in the final moments of the game against England as he helped deny wing David Strettle a try, but the Wales camp has not indicated whether there is any lingering effects.

Wales are unbeaten against Italy at the Millennium Stadium and only they can win a Grand Slam this year by holding them to a 17-17 draw in Paris.

Gatland will name his side to face Italy at 1300 GMT on Tuesday.