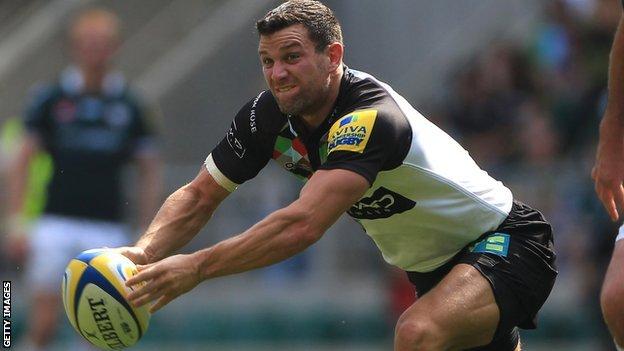 England have called up Harlequins scrum-half Karl Dickson to the squad preparing for Sunday's Six Nations clash with France in Paris.

The 29-year-old, whose brother Lee is England's incumbent scrum-half, will provide cover after Wasps' Joe Simpson dislocated his shoulder.

Wasps lock Joe Launchbury, 20, has also joined the squad, but primarily to gain experience of the national set-up.

The experience, the age, the physicality of the French pack and their mindset in the scrummage and the drive and maul means it will be a massive challenge up front.

He will also provide back-up for Courtney Lawes who has a shin problem.

England coach Stuart Lancaster said: "We got Courtney's injury and we want to use it as an opportunity to bring some younger players in and getting them experience of training with England.

"Joe was exceptional in the Under-20 World Cup and has done well in the Wasps academy. He has started the season well and gone into the Saxons. He missed the programme unfortunately because of injury but now he is fit again it is a good opportunity to take a look at him.

"We did it with [Harlequins hooker] Chris Brooker last weekend. It is all about the long-term evolution of the England team."

Launchbury, England players' player of the tournament at the 2011 Under-20 World Cup, said: "I am totally shocked but thrilled to get the chance to train with the squad.

"It was a totally unexpected call especially as I have missed so much of this season but it's a great opportunity for me to pick up some really valuable experience at the highest level. I'm really looking forward to it."

Karl Dickson is an outsider to make the 22 for Paris, with brother Lee expected to retain his starting spot and Leicester's Ben Youngs likely to remain on the bench.

Lancaster had words of encouragement for Youngs, who lost his place in the side to Dickson for the 19-12 defeat by Wales but impressed for Leicester in their 36-3 win over Gloucester on Sunday.

"We've never lost any faith in Ben," said Lancaster. "He is a great young player and we are fortunate that we have some competition in the position."

Lancaster also indicated he would be seeking talks with currently suspended scrum-half Danny Care following the Harlequins player's drink-related arrest at the weekend - his third in the space of three months.

"I'll be meeting him as soon as possible about the decisions he's making and how it's affecting his chances of coming back and playing for England," said Lancaster. "We need to do that to make sure we rebuild the trust and we need to do that.

"I don't think he's got a long-term problem. I want to sit down with him like Conor [O'Shea, Harlequins director of rugby] to make sure he makes better decisions in the future.

"Long term I think he's got a future (with England) but short term obviously we made the decision he would not take part in the Six Nations and nothing has changed."

Lancaster also has increasing options at fly-half. Owen Farrell is expected to retain the number 10 jersey after impressing in Charlie Hodgson's stead against Wales, but Hodgson proved his return to fitness with a man-of-the-match display for Saracens against Northampton on Sunday, while Toby Flood, who came on in the second half at Twickenham, also impressed in Leicester's win over Gloucester.

A late Scott Williams try for Wales inflicted England's first defeat of the tournament, after Lancaster's side had beaten Scotland and Italy in their first two matches.

However, the England coach chose to focus more on an improved performance than the result against the Welsh ahead of the trip to Paris.

"The irony is we played some of our best rugby and lost," said Lancaster. "The trick now is to build again and get ready for France, which is going to be a massive physical challenge. You saw their game against Ireland; it was massively physical.

"The experience, the age, the physicality of the French pack and their mindset in the scrummage and the drive and maul means it will be a massive challenge up front. It is one we need to be ready for. Equally we need to go there full of confidence and impose our game on them."