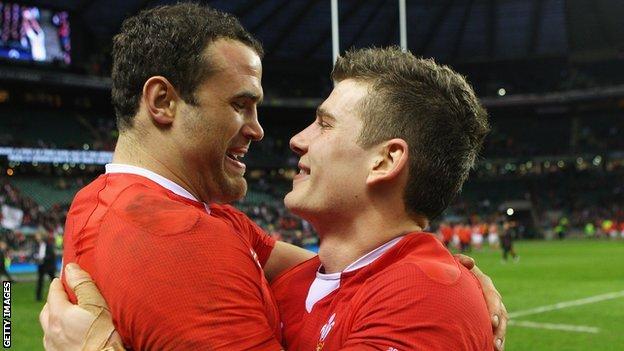 Centre Jamie Roberts admits he was more nervous ahead of Wales' team announcement to face Italy than at any time during his Test career.

But coach Warren Gatland has stuck with Roberts with Williams on the bench.

"Playing for Wales is never a given and I was probably more nervous before this week than I ever have been in my career," said Roberts.

While Roberts, the 2009 British and Irish Lions' man of the series in their 2-1 Test series defeat by South Africa, was wary of Scarlet Williams' challenge, he also had to fight back from the medial knee ligament injury that forced him off at Twickenham.

Doubts remain over his fitness, with Roberts saying he will "hopefully" be fully fit for Saturday after playing a limited role in training.

The backline is going well at the moment. It's a good combination - strength and finesse I suppose

He added: "Obviously disappointed to come off in Twickenham and it's a tough week's rehab. The knee is back fully fit and the medics have passed me fully fit for the weekend.

"Scott came on and did a sterling job. I was very nervous before team selection.

"And that selection, that pressure for positions is certainly driving everyone on and you need it in a successful squad.

"I know I'm one game away from being dropped, it's as simple as that, and I know I have to repay the faith Warren has shown in me.

"Individually, I have to repay that faith, otherwise I won't be playing next week [against France]."

Roberts' inclusion and Gatland's confidence in the men in possession means Wales' starting back division is unchanged for the fourth successive game.

They combined to score six tries in the only two victories against Ireland and Scotland, with Williams ensuring backline's dominance of tries continued against England.

"It's reassuring and it's good to see continuity as well," said Roberts.

"I feel as a backline trust has been placed upon them and it's important we repay that.

"The backline is going well at the moment. It's a good combination - strength and finesse I suppose.

"And a lot of players are threats throughout the backline and certainly if we click it's a tough backline to defend against.

"But we know there's another level in us.

"In the first three games we've shown in patches we can be very good and it's just up to us now as a backline to show that for 80 minutes.

"And certainly the boys are working very hard in training at improving individually and collectively."

Having beaten Ireland, Scotland and England to secure a Triple Crown, victory over Italy will set up a Six Nations title and Grand Slam assault when France arrive at the Millennium Stadium on 17 March.

Wales are unbeaten against Italy at the Millennium Stadium and only Gatland's men can now win a Grand Slam this year by holding them to a 17-17 draw in Paris.