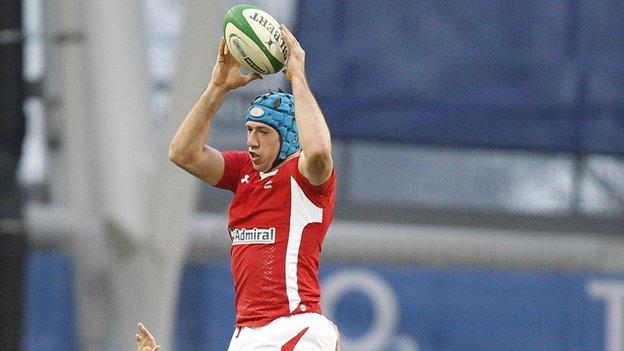 Any aspiring openside in Wales is going to have a very difficult time winning international honours in the next few seasons because we have a situation that we've seen elsewhere in world rugby in recent years.

New Zealand had my former Ospreys team-mate Marty Holah behind Richie McCaw for years and years - and Marty was probably the second-best seven in the world at the time.

Similarly Australia had George Smith and Phil Waugh being rotated in selection at Test level for a long time.

Now we have Justin Tipuric and Sam Warburton competing at openside with Justin having a chance against Italy because of Sam's injury.

Justin's a fantastic player and he's obviously very unlucky that he's got Sam in front of him at the moment.

Sam is a world-class player - one of the best sevens out there - and Justin isn't far behind.

If there is a rotation system in Wales selection, I'm sure Sam wouldn't have any problems with that because he puts his body on the line week-in, week-out.

And for him to continue doing that at the highest level, it's going to take its toll.

So you'd like to think that Justin would get his chance and I think he'll certainly prove his worth against Italy, a team who should suit him.

Hopefully Justin can put his hand up on the weekend and say "hold on, wait a minute, I know Sam is a great player and a great leader, but I'm also here too".

Sam and Justin have great futures in the Welsh team, but it's going to be very difficult for any other sevens out there in Wales thinking "even if I can get past Tipuric, I've got to get past Sam then".

It's a great positive to have Matthew Rees back fit at hooker - he'll be fresh and chomping at the bit after an injury lay-off that's kept him out of the Six Nations so far.

But I've got to feel for Ken Owens - he did very well against England, but you've got your full-strength front three back at the moment with Adam Jones and Gethin Jenkins either side of Matthew.

I think they'll do it [the Grand Slam], but when I was playing we weren't allowed to mention it so I shouldn't really be mentioning it now

You've also got to have sympathy for Scott Williams, the hero of the day against England.

But Jamie Roberts has been one of the head figures for Welsh rugby for a long time and Wales need the likes of him to get the go-forward.

Wales will be a little bit nervous and that's good - there's no point being over-confident against Italy.

They are coming back from a heavy defeat by Ireland, they're a proud bunch of guys and have caused us problems over the years so I'd be a little bit cautious.

But if we continue playing as we are, Italy are the type of team that would suit the kind of game we are playing.

Italy will compete for 40 minutes and I think that Wales have proven they can do that and go into half-time either losing or drawing before coming out to blow teams away.

I don't mean that points-wise, I mean it performance-wise, although if you give Italy a sniff they'll stay in there right to the end.

So I think Wales have got a massive 40 minutes ahead of them and in the second half, they will be the fitter side.

Wales are the best side in the Six Nations, but that doesn't mean you're always going to win all your games.

And I hate mentioning the Grand Slam, especially with two games left - that would be arrogance.

This Italy game is going to be tough enough and it will take a lot out of Wales physically ahead of the last Six Nations game against France.

But France have got some hard work to do, haven't they?

They've had the drawn game against Ireland and they've got the other two games in a row against England, then Wales.

That's going to take it out of them physically - there will be injuries and it's certainly looking and lining up to be a Grand Slam for Wales, but I don't want to jinx the guys.

I hope they do it - they deserve to win a Grand Slam, especially after their heroics in this Six Nations and, of course, the World Cup.

They are by far the best team in this Six Nations and they deserve it. I do see a lot of things in the French game that Wales can attack and that suits us.

So I think they'll do it, but when I was playing we weren't allowed to mention it so I shouldn't really be mentioning it now.

Shane Williams will be part of the BBC's coverage of Saturday's game between Wales and Italy, which begins at 1400 GMT on BBC One.

He will also be answering your questions early next week. More information on how to submit your questions to Shane will be found on bbc.co.uk/scrumv on Monday, 12 March.