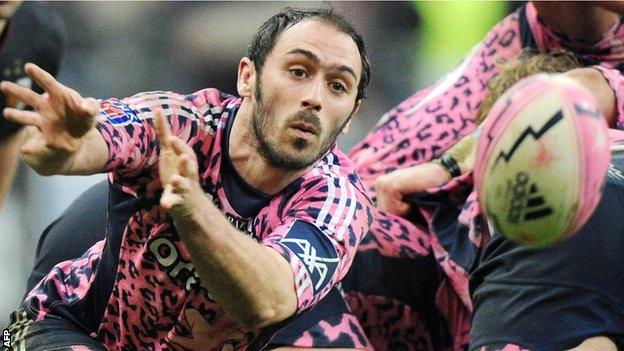 France have dropped experienced half-backs Morgan Parra and Francois Trinh-Duc for the Six Nations match against England on Sunday.

Coach Philippe Saint-Andre has replaced the duo with Julien Dupuy at scrum-half and Lionel Beauxis at fly-half.

Centre Aurelien Rougerie has kept his place even after his intercepted pass led to a try in the 17-17 draw with Ireland last weekend.

Parra kicked four penalties against Ireland, but he and Trinh-Duc failed to spark France's attack.

"They know each other well because they've played together as half backs at Stade Francais," Saint-Andre told reporters on Wednesday.

"It's a strategic choice on my part. England are the team that occupy the field of play the most, especially away from home."

After the stalemate against Ireland, France will need to avoid defeat against England to head into the final game with Wales on 17 March in Cardiff with a chance of winning the Six Nations.

This week it is "Le Crunch", that well-worn label for an encounter that often provided a decisive pointer to the destination of the title in the 1990s and early 2000s.