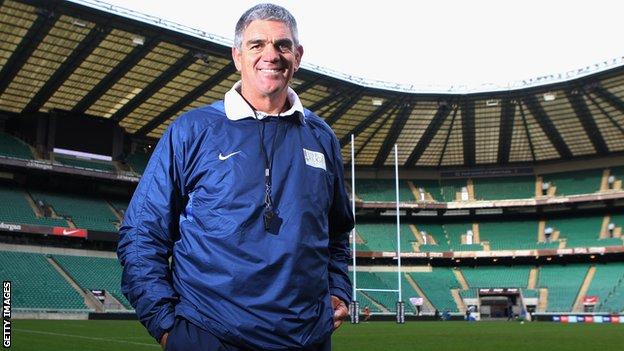 Nick Mallett will be named the next England coach, according to BBC Sport rugby union analyst Jeremy Guscott.

Mallett, 55, has emerged as one of the favourites to replace Martin Johnson.

Stuart Lancaster has taken temporary charge during the Six Nations, but Guscott expects South African Mallett to get the job permanently.

"It looks very much like Nick Mallett will get the job because of his record and international coaching experience," he wrote in his BBC Six Nations Q&A.

Since Johnson stood down in November, Mallett, former Ireland coach Eddie O'Sullivan and ex-Italy coach John Kirwan have been linked with the post.

WHO IS NICK MALLETT?

Mallett, who previously coached South Africa and Italy, rejected an initial approach from the Rugby Football Union to apply for the England job in November.

Last Friday, Kirwan backed Mallett to get the job permanently after he revealed the headhunters hired by England to find Johnson's successor, Odgers Berndtson, had told him "they were looking for someone with a higher international profile."

Guscott supports this approach, believing former international team-mate Johnson "shouldn't have been given the job in the first place because he didn't have the CV to do the job."

So far, caretaker coach Lancaster is the only person to have formally registered an interest in the post.

Guscott believes Lancaster, whom RFU chief Ian Ritchie confirmed would be interviewed for the role, has "done a terrific job" during the tournament and could not be ruled out of the reckoning completely despite his lack of experience.

England hope to have a new man in place before the June tour to South Africa.

Guscott will be replying to readers' questions in his weekly Q&A session throughout the season.