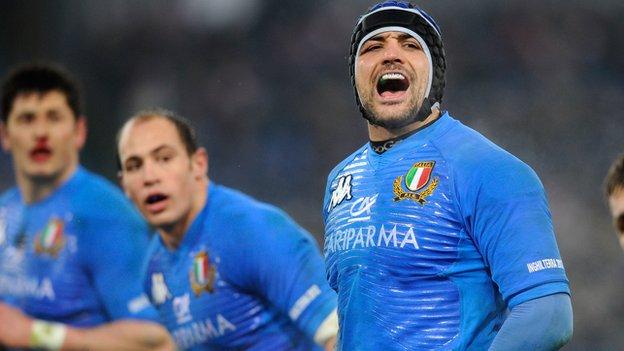 The Welsh hope to take one step closer to their third Grand Slam in eight years with victory against Italy and Bortolami accepts Wales are favourites.

But the 31-year-old has told his men to get in to a position "to smash them back" at the Millennium Stadium.

"I'm sure they are thinking and get the job done in the first half," he said.

"And chill out for the last game.

It will be a very tough first 20 minutes, they will come out, try to score as many tries as they can and play from every single area on the pitch and put us under pressure

"But I know their coach will put a lot of emphasis on this game because they cannot afford to lose.

"It will be a very tough first 20 minutes, they will come out, try to score as many tries as they can and play from every single area on the pitch and put us under pressure.

"But we have to deal with this approach.

"Definitely they are the favourites but we are going to Cardiff hoping to make a big impression and after a poor performance against Ireland and we have to step up again."

The former Italy skipper is dropped to the replacements bench for Saturday's match in Cardiff in an Italian side showing seven changes from the one that lost 42-10 to Ireland in Dublin on 25 February.

"We are very confident but we also know it is going to be a very tough game for us playing Wales in Cardiff," said Bortolami.

"They play a very structured game, are very physical and they have key players who can make the difference, but they were also quite lucky to beat Ireland and England in the last seconds."

Bortolami, who has won 71 caps for Italy and captained Gloucester in a four-year spell in England, expects Wales to be fully focussed on adding a Grand Slam to their Triple Crown trophy haul in 2012.

And the Aironi second rower certainly expects a physical confrontation on Saturday.

"They are very physical," said Bortolami.

"They play a very structured game and are very patient and can play 25 or 30 phases easily.

"If we don't get into position it is difficult to be effective in the tackle so we have to get the structure right and get in position to smash them back."