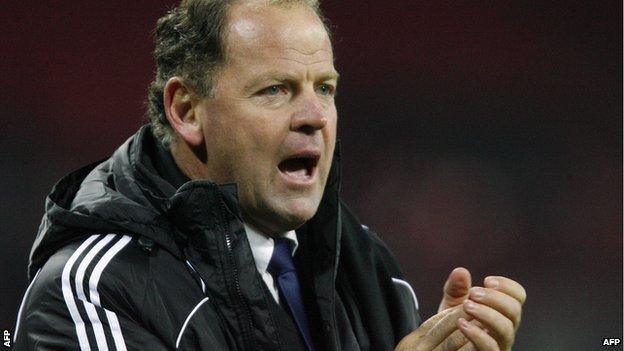 White is eight months into a four-year deal with the Brumbies in Australia and says he will see out his contract.

Just 24 hours after declaring an interest in the England position, Jake White took to Twitter to perform a U-turn that will not please the RFU hierarchy. He had confirmed on Thursday that they had approached him. White was the only one of the contenders with a World Cup under his belt, having led the Springboks to glory in 2007. But he's now committed himself to the Brumbies in Australia. It leaves the path clear for a straight shoot-out between the current interim coach Stuart Lancaster - who has another chance to state his case this Sunday when England play France in Paris - and the former South Africa and Italy coach Nick Mallett.

White tweeted: "[It is] always hard turning down a chance to win a World Cup but rugby is about making the right decisions and that's to stay with the Brumbies in Australia."

On Thursday, White said the RFU had approached him about coaching England.

BBC Radio 5 live rugby union commentator Alastair Eykyn said while White had used the phrase "turning down" the opportunity of coaching England, he had not actually been offered the job.

White had previously stated his commitment to remain with the Brumbies until the end of their current campaign. That would have ruled him out of England's June tour to South Africa.

He subsequently tweeted his "thanks for all the interest and support", and pledged to focus on the Brumbies' next fixture against the Cheetahs at Canberra Stadium.

Asked at a news conference in Canberra on Friday whether he was interested in the post, the 48-year-old replied: "No, no, no, no.

"I'm here for four years with the Brumbies. I've signed on the bottom line and you've got to judge people by their actions.

White, who took over at the Brumbies last July, said there was nothing wrong with having expressed an interest in the role and did not rule out a move in the future.

Interim England coach Stuart Lancaster is expected to be interviewed before the end of the Six Nations as the RFU search for Martin Johnson's successor.

Nick Mallett, Eddie O'Sullivan and John Kirwan have all been linked to the job.

Sir Ian McGeechan, Conor O'Shea and Richard Hill will join chief executive Ian Ritchie and Rob Andrew on a five-man panel which will advise the RFU board.

England play France on Sunday and finish their Six Nations title defence against Ireland on 17 March.