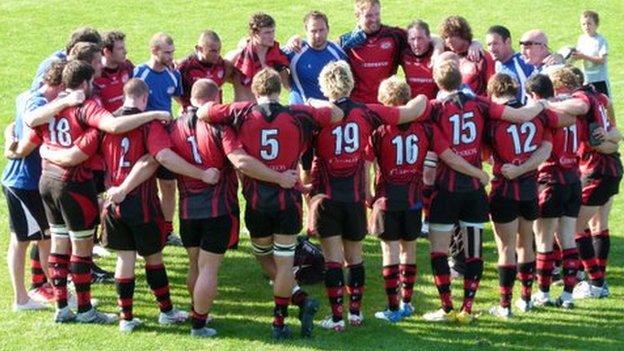 Jersey's lead at the top of National One is down to four points after a first defeat in more than five months, losing 22-20 at bottom club Barking.

The islanders had been ahead going into the dying seconds after tries from Ed Dawson, Nathan Hannay and Nick Trower.

But former Jersey player Andrew Henderson went over with a last-gasp try to pull the scores level.

Chris Ashwin held his nerve with the conversion to end the island side's 18-match winning streak.

We're devastated but we give all credit to Barking

The victory keeps alive Barking's outside hopes of avoiding relegation, but they will almost certainly need to win all their remaining games.

Jersey had been 10-0 in front but a try from Barking's Alex Dodge just before the break set up a tense second half.

The hosts went in front after the interval through a try from Francis Ambrose but Jersey hit straight back when Hannay touched down to put the islanders back on track.

Nick Trower's try looked like it could set up a 19th consecutive win, but Henderson's late heroics gave Barking the victory.

"We're devastated but we give all credit to Barking," said Jersey's director of rugby Ben Harvey.

"The boys will probably tell you they probably didn't show as much heart and desire today as they should have done.

"It's incredibly hard to get out of this division and we still haven't done it yet."

Jersey take a losing bonus point from the match, but second-placed Ealing fought back from behind to win 63-37 at Cambridge and close the gap at the top to four points.

Third-placed Fylde lost 39-26 at Coventry and are a further four points back.