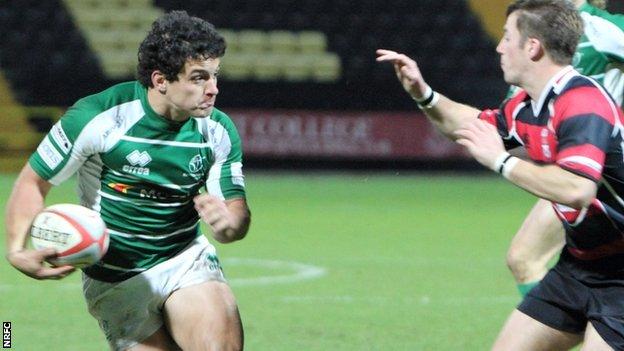 Nottingham's Juan Pablo Socino says he is refreshed and ready for the Championship play-offs after a much-needed break in his native Argentina.

The versatile back flew to Buenos Aires for a week after a gruelling regular season campaign in which he played all 22 matches for the Green & Whites.

"It was good for me to have a break, especially mentally," Socino said. "I feel completely relaxed."

Nottingham begin their campaign away against London Welsh on Saturday.

It was good for me to have a break, especially mentally

It is the first of six matches they play in their four-team pool.

The winners and runners-up from each of the two pools progress into the semi-finals.

The former Rotherham Titans player said his break, after three years of non-stop rugby in Britain, was most welcome.

"Eighty minutes in every game over three years is a lot," he added.

"I could have stayed here and relaxed and recovered and I would have been good, but what was best was to get back home and spend some time with family and friends.

"It was hot and humid at home, but getting to see my grandparents down at the beach and having some good home-cooked meals really recharged me."