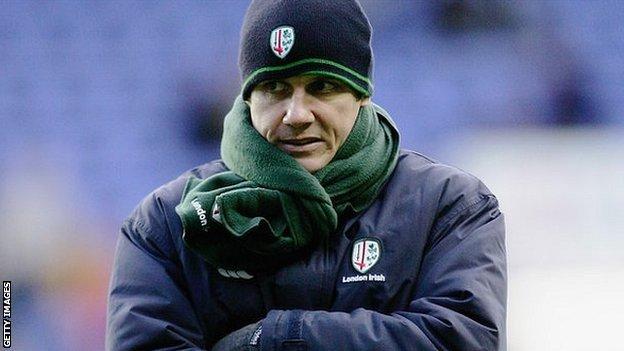 Smith, 45, returns to the club, having also held the role with the Exiles between 2005 and 2008, and Toby Booth will remain as head coach.

The Australian left his role with England following a World Cup tournament beset by on-field failings and off-field disciplinary problems.

"I am delighted to be returning to London Irish," said Smith.

Following England's disappointing World Cup last year, which saw them knocked out at the quarter-final stage, separate reports were commissioned by the Rugby Football Union, the Rugby Players' Association and the Premiership clubs into what went wrong in New Zealand.

According to the leaked Rugby Players' Association report in the Times the former Exiles coach was described as "the lowest rated of all the coaches".

Among other things, Smith was accused of "not understanding the game well enough", being "uninventive" and "not offering anything".

However, he is widely credited as having been instrumental in laying the original foundations of London Irish's most successful years taking the club to third place in the Premiership, the final of the European Challenge Cup and a Heineken Cup semi-final against Toulouse.

After his departure, Booth became head coach and he continued to steer the Exiles through their most successful period of the professional era, leading the club to a Premiership final and Heineken Cup tournament qualifications for three successive years.

"Toby and I have always had a great relationship and that brought with it a lot of success on field in my time at the club and I know that we're destined for even greater things," added Smith.

"We're building a new squad with fantastic potential and if we all pull together we can really make things happen."

Prior to England and London Irish, Brian was defence coach at Bath Rugby helping the club to reach the 2002-03 final of the European Challenge Cup and the 2003-04 Premiership final.

His coaching career had started with Sydney-based Eastern Suburbs, who went undefeated in 2000, which led to a coaching role with the ACT Brumbies and a Super 12 final in 2001.

He is a dual rugby international having played at fly-half for both Australia and Ireland and he is also an Oxford Blue.

Smith made his debut for the Wallabies on their successful 1986 Bledisloe Cup Tour and played in the inaugural Rugby World Cup in 1987.