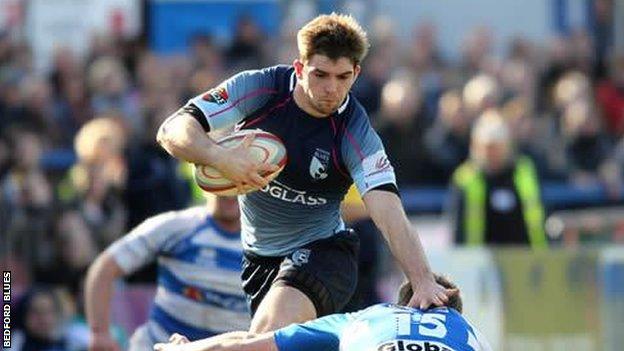 Bedford Blues boss Mike Rayer has said promotion to the Premiership is not off the agenda this season.

The Blues' Goldington Road ground does not meet top-flight standards and chairman Geoff Irvine described the Premiership as a "closed shop" in July.

But Rayer has not ruled out a possible groundshare, were they to win the upcoming Championship play-offs.

"Wherever we end up after that will be a job for the board to decide," he told BBC Three Counties Radio.

"Everybody's in this to win. Players, coaches, chairman. We're all in it to win it.

"Who knows? Perhaps we could be playing at Milton Keynes or share with Northampton or have a new stadium built at Bedford.

"But if we actually put ourselves in the position to win it then we can ask those questions and that's all we're concentrating on at this minute in time."

Bedford, as they did last year, have qualified for the play-offs as the second highest team in the first stage, giving them a three-point bonus in their group.

Rayer's men were edged out by eventual title winners Worcester in the 2011 semi-finals and suffered the double disappointment of losing the British & Irish Cup final to Bristol.

And the Blues manager admits it would be gratifying to claim some silverware to reflect their form over the two seasons.

"It would, yes. We were left a little flat and disappointed at the back end of last season," he said.

"But that's getting ahead of ourselves. We know our goals. We want to go one step further but there's an incredibly tough six weeks ahead of us.

"We've put ourselves in the best possible position of being in the semi-final. Everyone will fancy getting there and we'll see what happens after that."

Bedford will face Rotherham, Cornish Pirates and Leeds in their group, starting with a trip to Rotherham on Saturday.