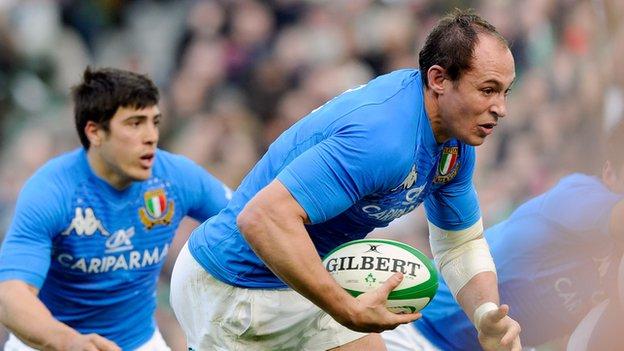 Parisse says Italy were embarrasing at times in defeat by Ireland.

"We beat Wales in 2007 in Rome, but at this moment I can't say that we really can beat Wales because they are playing fantastic rugby," he told the BBC's Sport Wales programme on Friday.

"Going to Cardiff to the Millennium Stadium against this team is probably something impossible for us."

That leaves the Stade Francais number eight believing Italy's toughest task of the tournament lies ahead even if Wales' minds may already be drifting towards a possible Grand Slam clash against France a week later.

In the opening rounds Wales beat Ireland, Scotland and England to secure a Triple Crown while Italy came unstuck despite respectable battles against France and England before going down 42-10 in Dublin.

Against Ireland we produced a good 40 minutes, but we were embarrassed in the second half

Parisse, who led the Barbarians to victory against Wales in Cardiff in June 2011, added: "Every time we go on the field we go out to win because we believe that we have the possibility to do it.

"But for sure, we must play the perfect match. Everyone must do [play] his best match of this year to beat Wales.

"But for me, probably, without doubt it's [Wales] the best team at this moment in the competition."

"Probably the staff and unconsciously even the players are thinking more about the match against France because probably it's possible for them to... win the Grand Slam.

"But I think they respect us as a team and they know probably for sure we are not the best team in this competition.

"But if they don't take the match seriously, probably we can put them under pressure."

Italy also have a chance to redeem their defensive respect after the second-half drubbing in Dublin.

"Against Ireland we produced a good 40 minutes, but we were embarrassed in the second half," Parisse told Friday's Sport Wales programme.

"We have a big opportunity against probably the best attack of the Six Nations to improve our defence and we have worked a lot this week on it.

"We are a team that must play for the 80 minutes at a high level to have any possibility to beat teams at the end of a match.

"We are not the team who will score five or six tries.

"We are not the team who have 10 chances to score so when we have the possibility or three points or a penalty, or even score a try, we must take it."

Wales are unbeaten against Italy at the Millennium Stadium and only Gatland's men can now win a Grand Slam this year by holding them to a 17-17 draw in Paris.