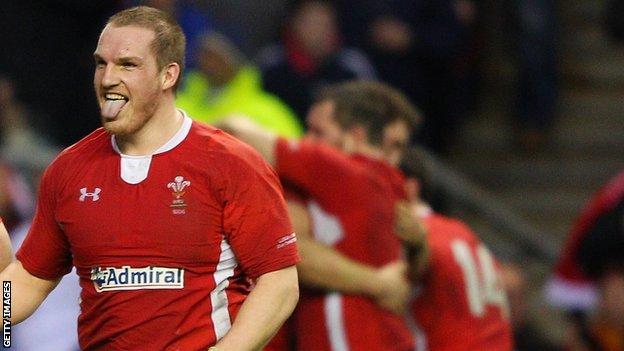 Warren Gatland admits quiet man Gethin Jenkins' intelligence is why the prop will captain Grand Slam chasing Wales in their .

The British and Irish Lions prop will be looking for his first win in four games as Wales captain in Saturday's Millennium Stadium showdown.

Regular skipper Sam Warburton is out and Gatland could have handed the armband to former captain Matthew Rees.

"It's an easy team to captain," Wales coach Gatland insisted.

"And I am not worried at all that it is our third captain in four games.

"Gethin is someone who doesn't talk a lot but tends to talk later in the week - and for a front row forward he is very intelligent and understands the game extremely well.

"He is really good for the coaches, particularly at half-time, to get an opinion on attack and defence.

"I spoke to Matthew Rees but the important thing for him, as somebody who missed out on the World Cup and is having his first start in this Six Nations, is that he concentrates on his own position."

Gethin is an outstanding rugby player and one of the best, if not the best, loosehead prop in world rugby

Recalled hooker Rees, who lost the captaincy to Warburton ahead of the 2011 World Cup as the Scarlets man missed the tournament to undergo neck surgery, replaces Ken Owens in an all-Lions Test front row alongside Jenkins and Adam Jones.

Jenkins, already a double Grand Slam winner, will be Wales' most experienced player in their starting line-up against Italy as the 31-year-old will win his 86th Test cap on Saturday.

Gatland, a former hooker himself, is unequivocal about how highly he rates the Cardiff Blues loosehead and his contribution to Welsh rugby since his international debut in 2002.

"Gethin is an outstanding rugby player and one of the best, if not the best, loosehead prop in world rugby," said the Wales coach.

Jenkins, Wales' most-capped front row forward, will and has signed a deal to join Jonny Wilkinson and Matt Giteau at French Top 14 club Toulon next season.

"Gethin is going to be a loss to Welsh rugby when he goes to Toulon," admitted Gatland.

"But hopefully from a Wales point of view we will get a few more years out of him."