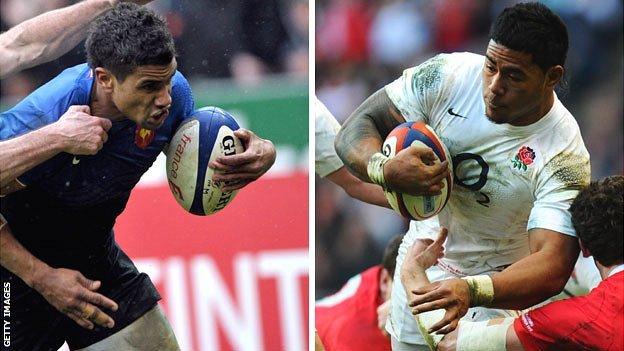 I'm quite pleased with England after their performance in the 19-12 defeat by Wales last time out - and they have to take inspiration from that when they face France on Sunday.

For once they have some positives to draw on despite losing.

If we think about how England played in the first two games - allowing for the fact that conditions weren't great at either Murrayfield or in Rome - while they defended well, they just didn't look like scoring tries.

At least against Wales there were a couple of clear-cut opportunities, through Manu Tuilagi and David Strettle, and they produced good phases of play outside of those two moments and tried to raise the tempo.

We need to see more of that on Sunday if they are to hand France a first home defeat in the Six Nations since 2008, when England won in Paris under Brian Ashton.

What should England do on Sunday?

What England have to do is fairly straightforward. When you have someone like Tuilagi, it doesn't matter if the ball even goes to him, because the defence will believe that's where it's going so he works as a decoy.

If you've got a bloke who's 6ft 1in and 17st 9lb running at you, I know who's going to win that collision, especially when he's got a low centre of gravity.

If England can get Tuilagi and Brad Barritt into the French midfield there is no doubt in my mind they will get across the gainline.

We've not seen much of Barritt yet with ball in hand - he needs to get involved in the action.

England will win quick ball against the French, it's what they do next that is important.

Where do England have to improve?

The next stage for England is to develop what happens after Tuilagi has given them forward momentum - they have to get the next wave of attacks coming, and that's where the back row of Ben Morgan, Tom Croft and Chris Robshaw have to impose their game.

There's no doubt Morgan can break gainlines, but England need other runners making breaks because Chris Ashton feeds off guys who make breaks, and that hasn't happened enough for him to get involved in the game.

England have a back three that is potent in attack - just remember how threatening Ben Foden and Ashton looked when they made their first starts in the same fixture two years ago.

So the next step for England is to get the second wave of attack functioning, which will bring their dangerous back three into the game.

What do you make of the two French changes?

For any other side changing both your half-backs would be a major decision, but given the chop-and-change nature of previous coach Marc Lievremont, new boss Philippe Saint-Andre's decision to drop half-backs Francois Trinh-Duc and Morgan Parra is fairly minor.

When he played for Leicester, new number nine Julien Dupuy was very influential and he is a very good scrum-half with a good all-round game.

Fly-half Lionel Beauxis is more of a sit-in-the-pocket tactical kicker.

I'm not sure how pleasing that will be for inside centre Wesley Fofana because he's on a roll and if I was France I would be wanting to get the ball into his hands as often as possible.

Fofana is not just the stand-out back for France of this Six Nations, he's their stand-out player, and that's despite Les Bleus having the reigning IRB player of the year, the fearless Thierry Dusautoir, in their ranks.

How can we expect France to play?

For Saint-Andre this selection is all about getting a win following their draw against Ireland last weekend.

Picking Beauxis may not add to the French backline's running capability but I think Saint-Andre is quite happy to play a tactical game focused around taking territory and working the percentages on Sunday.

The England back three is quite small so expect the French to bang the ball high and send the sizeable likes of Imanol Harinordoquy, Rougerie and Julien Malzieu thundering after it.

Let's face it, what have France done so far in attack? In my book they will sit back, be prepared to defend and try to do a New Zealand - that is, defend hard, try to get a turnover and then counter-attack.

Their only problem is they don't have an attack like the All Blacks.

So what's going to happen in Paris then?

It might be a false dawn, but I was impressed by England against Wales and I think they're so close to delivering.

It is going to be harder against France, though, because they are a bit more physical than the Welsh, particularly up front - the English pack is going to get a real examination from the French eight.

The question is whether the Corbisiero/Hartley/Cole front row is hard enough to withstand the battering they will get from the hard-nut French trio confronting them.

If they crack there's no way back for England and they will get stuffed.

I don't think that will happen and if they do hold the powerful French in the scrum, which is the first line of defence, I believe England will win.