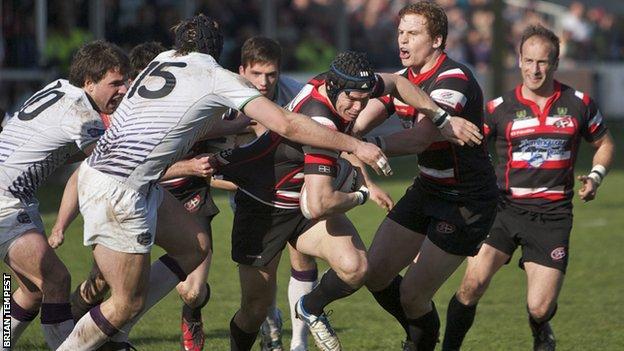 Cornish Pirates boss Chris Stirling has called his side's performance in their 14-14 draw with Leeds 'rubbish'.

Grant Pointer's early touchdown put the Pirates 7-3 ahead, but Stephen McColl struck back to give Leeds the edge.

Joe Ford's penalty extended the lead before Pirates went 14-11 in front through a penalty try before Ford's 66th minute kick tied the game.

"We were rubbish. It was a day when I don't think we could have been dumber," Stirling told BBC Radio Cornwall.

"It was disappointing in all aspects. We got a draw, but if a little bit of luck had gone their way they could have got a win.

"It was a game of missed opportunities and we should have been 20 or 30 points better than them," the New Zealander said.

Stirling felt there was not a single aspect of his side's game which functioned well in a draw which leaves the Pirates four points off Bedford, who achieved a bonus-point win over Rotherham.

"Our decision-making, accuracy, kicking, the whole lot, we were way off the mark," Stirling added.

"We'll look at it and identify the numerous point-scoring opportunities that we blew through lack of accuracy whether that be at set-piece, scrum or line-out," he added.