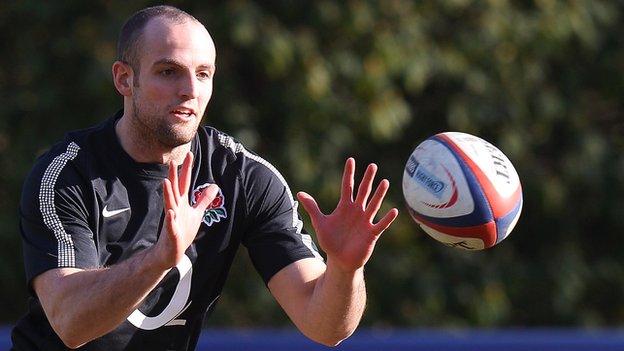 Gloucester winger Charlie Sharples is set to make his first England start after being called up to replace the injured David Strettle for Sunday's Six Nations game against France in Paris.

Strettle hurt his chest against Italy and failed a fitness test on Saturday.

Sharples, 22, won his only previous cap against Wales in August.

"Charlie's trained with us throughout the tournament so he has spent a lot of time with the other guys," said coach Stuart Lancaster.

"He almost made the World Cup squad and this is a great opportunity for him.

"I was impressed by England against Wales and I think they're so close to delivering, but it is going to be harder against France because they are a bit more physical than the Welsh, particularly up front"

Read the rest of Jerry's analysis

"It's unfortunate for David but he has been fitness tested by the medics this morning and is not 100% so it is a straight swap and Charlie is ready to go."

Before Strettle's sternum injury, which flared up again during training this week, England had named an unchanged starting XV for the game against the unbeaten French.

Sharples has been in excellent form for club side Gloucester, scoring four tries in his last six games.

Although he was not named in England's initial 24-man matchday squad, he believed his time spent in the training camp throughout the Six Nations meant he would fit into Lancaster's side seamlessly.

"It's a great opportunity for me," Sharples said.

"Obviously you never wish injury on anyone - it's terrible luck for Stretts - but it's an opportunity for me to come in and play, and one I've been waiting for throughout the Six Nations so I'm really excited.

"I'm comfortable in this environment. Obviously I've been training for the last six weeks with the boys and I feel I can just come in a slot in."

England are expecting a hot reception from a partisan Stade de France crowd and assistant coach Graham Rowntree, a veteran of England-France clashes during his 54-cap international career, has backed Lancaster's young side to use the atmosphere to their advantage.

Rowntree said: "This group of players are not overawed by the occasion - you can see it in their eyes.

"We've spoke about dealing with the atmosphere and using that to drive you.

"The French anthem is my favourite anthem and the passion when they're all singing it - the thought of that still makes the hairs on the back of my neck stand up.

"I had a chat with [captain] Chris Robshaw about us using that energy in the stadium. You've got to use that to drive yourself as a player in these big occasions."