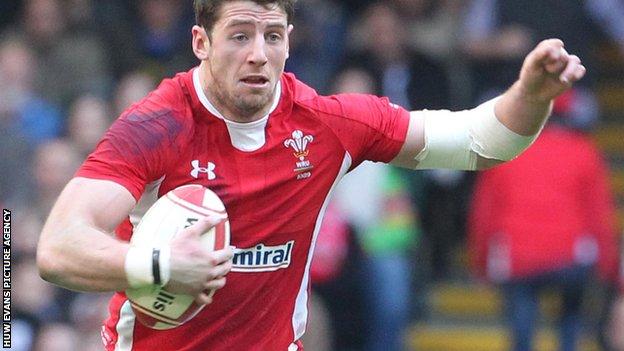 Wing Alex Cuthbert says Wales are not yet thinking about a Grand Slam despite their Six Nations win over Italy.

Wales made it four wins out of four to leave themselves needing to beat France to complete a clean sweep.

But Cuthbert, who scored Wales' second try, claimed the squad were still not thinking about next Saturday's final match against France.

"We've got to work hard before the French game next week," said Cuthbert, who scored against Italy.

"They [France] play a great brand of rugby and are a hard team to beat. We know they are going to come here all guns blazing and it's going to be a hard game.

"Obviously it will be sold out. We've got great fans supporting us and hopefully [I'll] work hard this week and get picked for the game."

Victory over France at the Millennium Stadium would secure Wales' third Grand Slam in eight years - and their second under Warren Gatland.

Wales had to work hard to break down the Italy defence with second-half tries from Cuthbert and Cardiff Blues team-mate Jamie Roberts securing victory.

Cuthbert paid tribute to the efforts of an Italian team who have lost all four games in this season's Six Nations and are bottom of the table.

"We knew it was going to be tough from the start," he said. "Obviously we had a lot of other chances and maybe weren't clinical enough.

"Their work-rate was outstanding. It was hard to break them down but we knew, if we worked hard, we'd grind them down for a win."