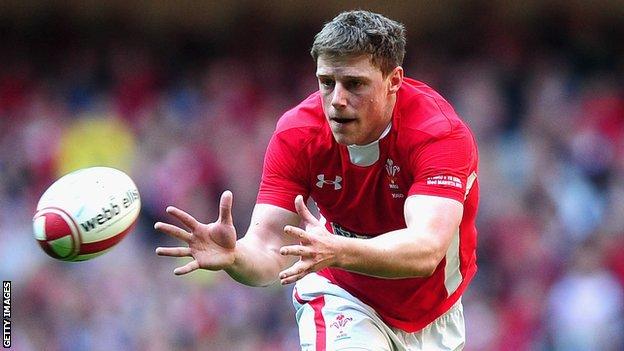 Fly-half Rhys Priestland says Wales will have to improve if they are to have any chance of securing the Grand Slam against France.

Wales laboured to a 24-3 win over Italy at the Millennium Stadium, their fourth consecutive win in this season's Six Nations.

And Priestland admits Wales will have to improve on the Italian performance when they face the French in Cardiff.

"We'll really have to be on top of our game," said Priestland.

"France on their day can be one of, if not the, best team in the world.

"Our defence will have to be good and we're going to have to take the right options in attack as well.

"It's going to be a really tough week and one we are looking forward to."

Head coach Warren Gatland said the Welsh players were "flat" following the victory over the Azzurri.

"The boys are a bit flat in the dressing room. I thought they really wanted to score some points and didn't really get a chance," said Gatland.

Scarlets fly-half Priestland believes Wales need to work on retaining possession after Italy repeatedly disrupted their ball at the breakdown.

"We have to be pleased with beating the Italians because they've got top players who are playing in some top teams in Europe," said Priestland.

"[We're] pleased with the victory but from a performance side of things there's a lot more in us than we showed.

"We managed to keep hold of the ball quite well and got down their 22 a lot. We didn't really keep ball when we got down there.

"It's pleasing we managed to keep hold of the ball [and] create opportunities.

"But the disappointing thing is we let them off the hook, especially in the first half where we perhaps knocked the ball on or got turned over in the contact area.

"I don't think we were on top of our game in the contact area, especially as backs, so we'll look at it this week.

"There's a lot for us to work on this week so we'll look forward to that."

Next Saturday's match will be the first time Wales and France have met since the World Cup semi-final in Auckland last October.

France won 9-8 in a game which will be remembered for the early dismissal of Wales captain Sam Warburton.

But Priestland says Wales will not be thinking about revenge as they target a third Grand Slam in eight years.

"But hopefully things will go more in our favour this time."