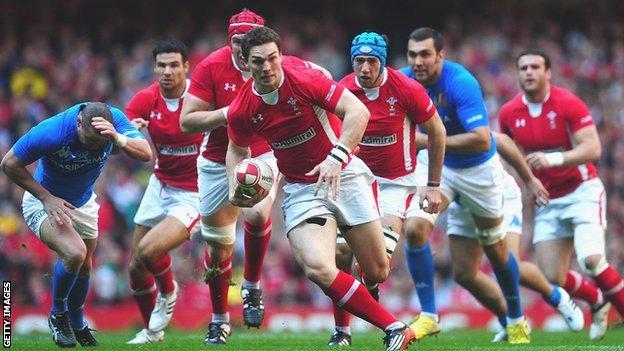 Wales stand on the verge of another Grand Slam win after seeing off Italy 24-3 at the Millennium Stadium on Saturday.

The same result in the same arena against France next Saturday will seal a third Six Nations clean sweep in eight years, adding to famous successes in 2005 and 2008.

That would match the achievement of the venerated Wales side that dominated the 1970s and earned Grand Slams in '71, '76 and '78.

But only time and trophies will see if this current crop of players can dominate northern hemisphere rugby in the same manner as their forebears.

Wales are likely to field half-a-dozen players aged 23 or under in their starting XV against France next week, which bodes well for future Championships, World Cups and Lions tours.

The youngest is wing George North, still just 19, who became the youngest player to win 20 Test caps on Saturday, while he already has 10 international tries on his CV.

Time is certainly on the side of coach Warren Gatland as he knows his current squad still has plenty of growing to do - at least in terms of experience. This is, after all, a team that weighs in at an average 107.7kg (16st 13lb) a man.

While his side will not be fully mature for quite some time, Gatland is sure his charges will not get carried away by the Grand Slam fever that will sweep Wales this week.

"I don't think it'll be difficult for us at all [to stay calm]; the young guys have really got their heads on... these young players are just taking things in their stride, which is fantastic," Gatland said.

"The players are well aware of the huge amount of hype... but at the moment I'd like to think they're in a good place."

England's dramatic 24-22 win in Paris on Sunday ended France's hopes of taking the title and leaves Stuart Lancaster's side as the only team that could mathematically pip Wales to the title.

Wales' points advantage of 38 means only the improbable combination of two one-sided results - a heavy France win in Cardiff and England thrashing Ireland at Twickenham - will deny Gatland's men the Six Nations title.

However, with that Grand Slam dangling enticingly in front of them, fumbling it by losing to France would leave the title as a bitter consolation.

Philippe Saint-Andre's side will arrive with just pride to play for, smarting from their Stade de France humbling by England.

France have beaten Wales in 11 of the past 14 encounters since 2000, the most recent of those victories the World Cup semi-final in Auckland last October, a game which will be remembered for the early dismissal of Wales captain Sam Warburton.

Wales will relish the chance to put right that defeat and will take heart from the fact that two of their three wins over Les Bleus in the past 12 years have resulted in those Grand Slams of 2005 and '08.

Despite the youth of the current squad, nine members played in the 2008 campaign and four of those - Gethin Jenkins, Adam Jones, Ryan Jones and Mike Phillips - were in the match-day 22 that ended Wales' 27-year wait for a Grand Slam.

Although his Test career is behind him, Cardiff Blues open-side Martyn Williams was a stalwart of the two previous Slams and believes Saturday's game was just what Wales needed for a reality check.

After impressive wins this campaign over Ireland, Scotland and England, Wales struggled to find fluency against the Azzurri despite winning comfortably in the end.

"I think that was the perfect game, it's brought them back down to earth," Williams said.

"They'll be in their little bubble up in the Vale Hotel all week, trying not to get too carried away with what's going on.

"There's still a few old heads who have been there and done it before so they'll be fine, they'll manage.

"They've just got to the semi-final of a World Cup, so they know what pressure games are about."

But while the mantras for the coming week in the Wales camp are calm and hard work, Gatland expects his players to be champing at the bit come game day.

"I thought the welcome on the bus [before the Italy game] from the Welsh supporters was absolutely fantastic," Gatland said.

"If it can't raise the hairs on the back of your neck, arriving at the Millennium Stadium next week for a Grand Slam game, then you probably shouldn't be there."