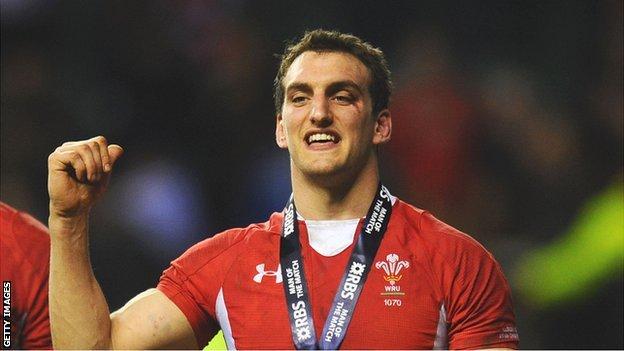 The return of fit-again captain Sam Warburton is Wales' only starting change for Saturday's Grand Slam match with France at the Millennium Stadium.

The open-side missed the 24-3 win over Italy with a knee injury but has been able to train normally this week.

Justin Tipuric impressed against Italy but drops out of the 22, as Ryan Jones covers more positions from the bench.

In the only other change, scrum-half Lloyd Williams returns among the replacements in place of Rhys Webb.

Williams, the Blues nine who is the son of Wales great Brynmor, was a late withdrawal last week because of a thigh strain but returns for rookie Webb, who enjoyed his first taste of Test rugby against the Azzurri.

"We have our captain back and, although Justin Tipuric is unlucky after playing well in his place last week, Sam's presence is a welcome boost to everyone," said Wales head coach Warren Gatland.

Unbeaten Wales have been able to name the same backline for the fifth match running, with the Blues and the Scarlets providing three backs each alongside France-based Mike Phillips.

The Bayonne scrum-half is the only player in the starting line-up currently plying his trade outside Wales.

Matthew Rees keeps his place in the number two shirt, with Scarlets team-mate Ken Owens is again the reserve hooker, and is set to win his 50th cap for his country.

Wales last played France in the World Cup semi-final in Auckland last October, a game won 9-8 by Les Bleus which will be remembered for the early dismissal of Wales captain Warburton.

Just three players - Shane Williams (retired), Huw Bennett (injured) and Luke Charteris (on the bench) - are absent from the side that started against France at Eden Park last Autumn.

Although the Wales camp has played down talk of Saturday's clash being a revenge mission, they will relish the chance to put right that defeat and secure a third Grand Slam in eight years - adding to those won in 2005 and '08.

"We are obviously aware of what this game means to the fans, 60,000 of them came to the Millennium Stadium during the Rugby World Cup to watch us face France in the semi-final on the television screens and that tells you everything about how dedicated they are," added Gatland.

"But this weekend we play in front of a sell-out 74,500 crowd with a chance to make history in Cardiff, they will be there to watch us in the flesh.

"They can make a real and positive contribution to the atmosphere and, like us, will be thinking of nothing other than the here and now.

"In camp all we can and must do is make preparations as normal, the magnitude of the game is not lost on us but it is irrelevant to how we prepare."