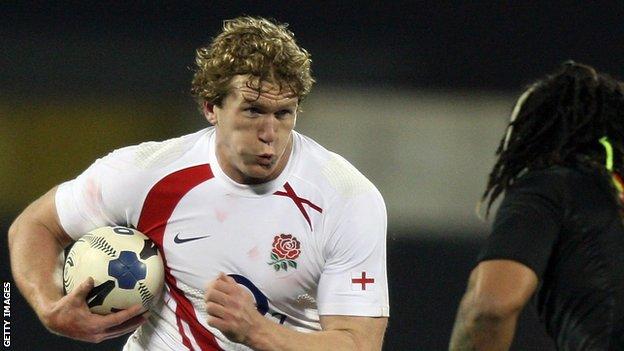 England and Wasps flanker Tom Rees has been forced to retire at the age of 27 because of a serious knee injury.

Rees, who was capped 15 times, ruptured his anterior cruciate ligament last summer and has been advised to stop playing immediately.

The Wasps captain made his club debut in 2003 and made 113 appearances.

"I'm gutted that I have been forced to retire at a time when I feel I could have contributed so much more to my club," he told the Wasps website.

"Whilst I will always think what might have been, I will also look back on my career and what I achieved with a great deal of pride.

"Over the last nine years I have been privileged to take part in my hobby for a living, and I am extremely grateful for that opportunity.

"I would especially like to thank everyone at London Wasps. They have given me such tremendous support at all times through my career but particularly of late, and I am sorry that I won't get to repay them for that.

"Finally, I would like to thank my friends and family for their constant support through everything I have done."

Rees, who is a two-time Heineken Cup winner with the north London side, has been plagued with injuries over the last three seasons.

He endured three shoulder operations between April 2009 and December 2010 before his most recent setback in August last year, restricting him to 18 first-team appearances over the last three campaigns.

Interim England head coach Stuart Lancaster said: "We all recognise Tom's qualities as a player and a person and it's going to be a shame that he will never be able to display his talent on the world stage again.

"However, he has tremendous attributes as an individual and a leader. I am sure he will go on to become very successful in his future career and all the players and management here in the England camp wish him well on that journey."

Rees, a Wasps academy product, has represented his country at seven levels from Under-16s up to Under-21s, as well as Saxons and the senior side.

He made his full international debut against Scotland in 2007 and, once again hindered by injury, featured in 15 Tests, making his final England appearance in New Zealand in a 44-12 defeat by the All Blacks.

Wasps director of rugby Dai Young added: "This is incredibly sad news for Tom and for everyone at the club.

"His attitude and commitment to the club remained hugely constant even when he was out injured and I know his presence will be missed around the squad.

"Reesy though is a very resilient and intelligent man and I have no doubt whatever he does with his career he will make a success of it."