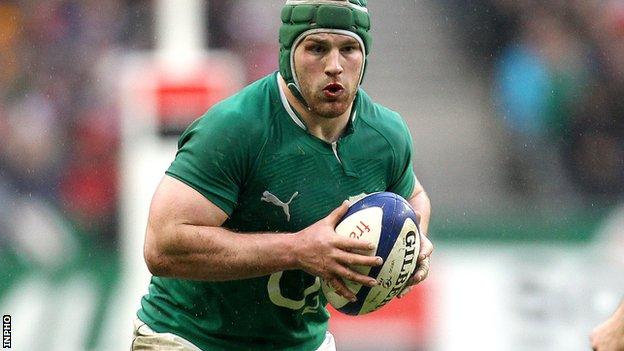 Sean O'Brien has been recalled to the Ireland team for Saturday's Six Nations game against England at Twickenham.

O'Mahony performed well in the win over Scotland after O'Brien was ruled out of the game with a foot infection.

Kidney's side is otherwise unchanged, with Eoin Reddan and Donnacha Ryan again playing in the absence of injured duo Conor Murray and Paul O'Connell.

Rory Best has overcome a slight rib problem and captains the side in the absence of O'Connell.

Ryan took a blow to the shoulder against the Scots but has also been named in the starting XV despite taking a limited part in training this week.

Best will become Ireland's most capped hooker when he makes his 59th Test appearance, eclipsing Keith Wood's milestone of 58.

Ireland have won seven of their last eight Six Nations matches against England, including three of the last four meetings at Twickenham.

The contest is likely to decide who finishes runners-up with Ireland ending the competition strongly by thrashing Italy, drawing with France and blitzing Scotland.

"I thought Peter (O'Mahony) played really well and it was an absolutely tight selection call, but Sean has trained well and just got the nod," said Kidney.

"England are improving with every match and have won three games on the road, so they will be looking forward to playing at home again.

"They had a fine win in Paris, so that will have given them a lot of confidence," added the Ireland coach.