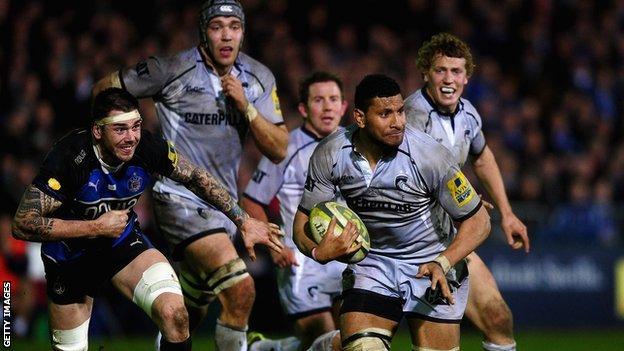 A young Tigers side with a smattering of experienced players won a thrilling semi-final at Bath on Friday.

But Ford hopes the players who helped secured a place in Sunday's final with Northampton stay in the side.

We had the attitude to go and have a dig. We knew if we fronted up in defence and had a dig in attack we could force a result

"Every lad who played in the semi-final deserves a crack to play in the final," Ford told BBC Radio Leicester.

"It was a brilliant experience playing in front of a full house. The atmosphere was electric. It was a tough environment to play in but everybody came through positively.

"Keeping the same lads together [who helped Tigers reach the last four] and giving them another chance was brilliant.

"All the lads have been buzzing to get out there and you could see that with the effort we put in and the spirit we had.

"We had the attitude to go out there and have a dig. We knew if we fronted up in defence and had a dig in attack we could force a result and we did."

Cockerill has previously said he would continue to play some of his younger players in the LV= Cup and insisted Ford was sure to retain his place.

"Fordy does some great things with ball in hand and his knowledge of the game is first rate, far beyond his years," Cockerill added.

"I've wanted to see him play at this level. He's come through with flying colours.

"It would be pretty cruel to leave him out of the side now. I'll play him next week."