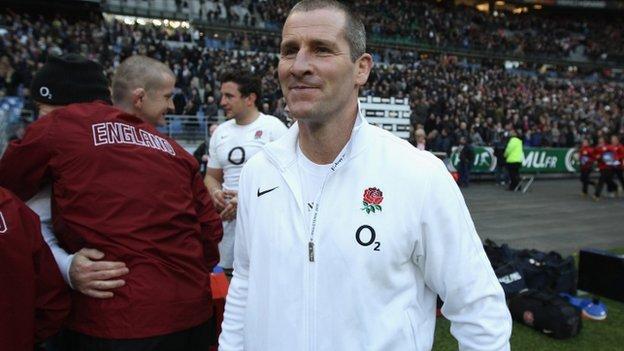 Austin Healey believes Stuart Lancaster should be named the full-time coach of England with immediate effect.

Lancaster, appointed head coach on a short-term basis in December, guided England to a 24-22 win in France on Sunday - the first visitors to win a Six Nations match in Paris since 2008.

"I think he is exactly the right man for the job," Healey, who won 51 caps for England, told BBC Radio 5 live.

"They should give him the job now and let him get on with it."

He added: "If the RFU [Rugby Football Union] continue the process [of looking for a permanent coach] then they'd end up just wasting money."

England have been without a permanent man in charge since Martin Johnson's resignation in November following a poor World Cup.

The current side, which includes several inexperienced players at international level, is second in the Six Nations table.

They face Ireland at Twickenham in the final match, and a big win coupled with a heavy defeat for Wales at home to France could see Lancaster's side take the title.

"Stuart Lancaster has embedded a lot of old ethos about playing for the shirt. That was missing from individuals at World Cup," continued Healey.