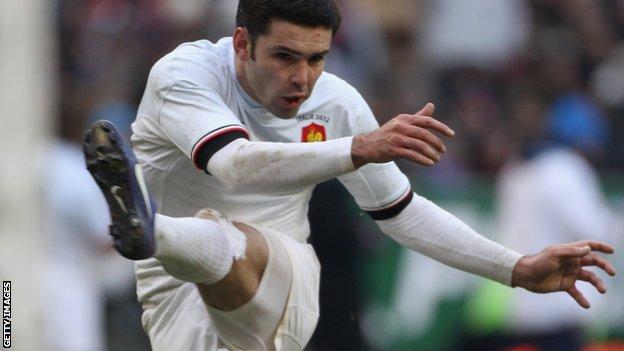 Yachvili's recall after a back injury is one of six changes to the team that lost to England in Paris on Sunday.

But captain Thierry Dusautoir (knee), Imanol Harinordoquy (knee) and Julien Bonnaire (elbow) have all recovered from knocks to start in the back row.

Wesley Fofana moves from centre to wing to replace Vincent Clerc, with Florian Fritz coming into the midfield.

Fofana has scored a try in all four of France's Six Nations games this season, which have yielded two wins, a draw and a defeat.

The other change among the backs for the match in Cardiff sees Alexis Palisson, a try-scorer in this fixture two years ago, take the place of Julien Malzieu on the opposite wing.

PREVIOUS MEETINGS IN THE SIX-NATIONS CHAMPIONSHIP

In the pack, William Servat is preferred to Dimitri Szarzewski at hooker, with David Attoub taking over from Nicolas Mas as the tight-head prop.

Attoub is now playing again after serving a 70-week ban for eye-gouging Ireland international flanker Stephen Ferris during a Heineken Cup clash between Stade and Ulster.

Yachvili is back after missing the Scotland and Ireland games in February with a back problem. He was replaced by Morgan Parra, who was in turn dropped for last Sunday's match against England as Julien Dupuy took the scrum-half role.

But Dupuy has now been axed after a stuttering display, as has left wing Malzieu, while right wing Clerc is sidelined with the shoulder injury that forced him off against England.

Also excluded are centre Maxime Mermoz and lock Lionel Nallet, who came on as replacements in Paris.

France are already without full-back Maxime Medard who was ruled out for nine months after damaging knee ligaments against Scotland.

Les Bleus have lost only once from six previous visits to the Millennium Stadium in the Six Nations - a 29-12 defeat four years ago when Wales clinched the Grand Slam.