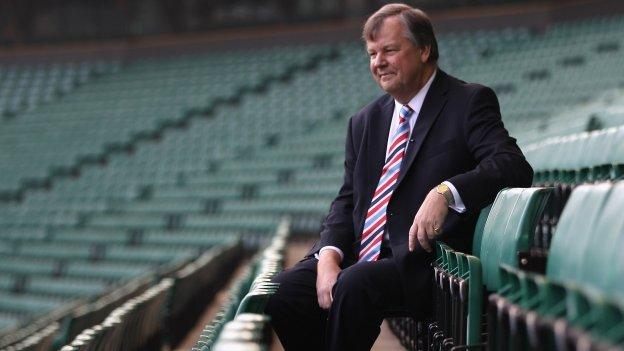 Rugby Football Union boss Ian Ritchie says he has a "great list of people" in the running to be England's head coach.

Interim boss Stuart Lancaster is in prime position for the job after Sunday's 24-22 win over France, but Ritchie said no decision had been made.

He said that the RFU would assess various candidates before appointing Martin Johnson's permanent successor.

"We are going through a proper process to try and find the best possible candidate," said Ritchie.

The RFU would appear to have a straight choice between Lancaster and former Italy coach Nick Mallett to lead England into the 2015 World Cup as host nation, after former South Africa coach Jake White ruled himself out of contention last week.

Lancaster, 42, has remained tight-lipped about his chances for the job, telling BBC Radio 5 live he was always aware that other "highly-qualified coaches" would be interested in the position.

He accepts that Lancaster's application for the job has been strengthened by England's win in Paris, but says that the RFU will not accelerate their recruitment process in light of the victory.

"I am of the view we have a great list of people interested in the job," he said. "And I include Stuart in that.

"When we are looking at the candidates who are in the frame, it is comparing different skills, different backgrounds, different experiences. It is a comparative exercise.

"Is it clear as well the team performs for Stuart? It is very clear," continued Ritchie.

"Stuart has been doing a fantastic job and this was a great result. It is a helpful thing to strengthen his case."

When I took over, we selected the squad we did, we wanted to build the experience for way beyond the Six Nations

Lancaster took over in December 2011 on an interim basis after Johnson's decision to stand down as manager following the failed World Cup campaign.

Under Lancaster, England have won all three of their Six Nations away matches for the first time in their history.

When BBC Radio 5 live asked Lancaster what he would tell a selection panel, he would only say of the England team: "From my point of view, it's just about giving it a best shot, in the short term, but also in the long term really.

"When I took over, we selected the squad we did. We wanted to build the experience for way beyond the Six Nations, right through the South Africa tour, into the autumn internationals and looking towards 2015.

"We've got a World Cup in our own country and we want a group of players who've got the right level of experience and right values to play for England. We're just on the start of that journey really."