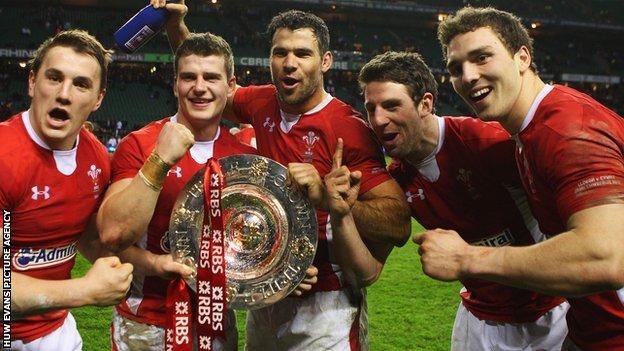 When BBC football pundit Alan Hansen uttered the memorable line in 1995 that "you can't win anything with kids", many in the world of sport nodded in agreement.

Sir Alex Ferguson's class of 1995-96 were the subject of Hansen's thoughts as he reacted to Manchester United's opening day 3-1 defeat that season at Aston Villa.

United went on to win the title that season and Wales coach Warren Gatland must be hoping for a similar outcome as they seek a Grand Slam against France in Cardiff on Saturday.

To an extent, if Hansen had expressed that very same thought about the current Wales squad, he would be right.

After all, the youthful faces who made their mark at the 2011 World Cup in New Zealand with some memorable performances returned home with a win against only one "tier one" nation - Ireland.

They lost to South Africa in a pool match despite having chances to see off the Springboks and came up short against France in a semi-final in which skipper Sam Warburton was sent off early on for his tip tackle on Vincent Clerc.

Those bare facts may appear to judge Wales harshly. But the record books simply reflect that Gatland's men finished fourth at the World Cup - one place lower than the nation's best effort of third in the inaugural 1987 tournament.

Scratch the surface of that recent Welsh history and the backers can also point to Adam Jones' injury in the semi-final against France as being of almost as much significance as Warburton's banishment.

But, while controversy is unlikely to go away when Warburton's punishment is discussed, Hansen would have classified him as among the "kids" - he is just 23.

The Cardiff Blue, as a relatively inexperienced captain, executed at best an overly-enthusiastic tackle on Clerc and in doing so may have proved Hansen's point.

We are playing for 80 minutes and we have a belief, like Manchester United

In addition, a trio of Wales squad veterans - Adam Jones, Gethin Jenkins and Ryan Jones - will be hoping to celebrate their third Grand Slam, following those in 2005 and 2008, securing a place in Welsh rugby's hall of fame alongside 1970s greats Gerald Davies, JPR Williams and Gareth Edwards who achieved triple Grand Slams.

Mike Phillips is also an old hand at the base of the scrum while, although only 25 years of age, Jamie Roberts is Wales' most experienced back with 42 Wales Test appearances.

What is more, along the way to a game Wales deny is a revenge mission, they have secured a Triple Crown at Twickenham and come from behind in the dying minutes to beat Ireland in their tournament opener.

Full-back Leigh Halfpenny, a 23-year-old with 30 caps, kicked a high-pressure winning penalty that day in Dublin as he sought redemption for the long-range miss against France at the World Cup that could have sent his side into the final against New Zealand.

That moment and Scott Williams' late try in the 17-12 win at Twickenham prompted defence coach Shaun Edwards to point to another Red Devils comparison.

Ahead of Wales' win over Italy last weekend, defence coach Edwards said: "We are playing for 80 minutes and we have a belief, like Manchester United."

Facing a French team who have nothing to play for in tournament terms, but with pride to restore following defeat by England and a draw against Ireland, could put Edwards' theory to the test.

But, if Wales come through it, the maturity of their young players will be among the talking points rather than the tenderness of their years.