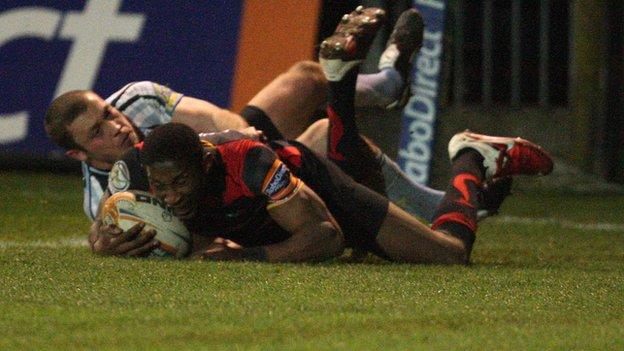 Wing Tom James raced away in reply for the the visitors and Parks and Ben Blair kicked a penalty apiece.

Robling added a penalty brace and Chavhanga did the rest to dent the Blues' play-off hopes.

The game had been rearranged after postponement amid a deluge in November and both sides were without leading players as Wales bid for a Grand Slam against France in Cardiff on Saturday.

Their absence gave others a chance to shine and Dragons' open-side flanker Darren Waters seized his chance with an impressive display against 99-cap Wales veteran Martyn Williams.

Waters' display earned him the man-of-the-match award while Williams' night ended on an unhappy note as he departed after 54 minutes with suspected rib damage.

At that stage the Blues were trailing 13-11 in a scrappy contest peppered with breakdown and scrum offences as well as a glut of handling errors.

But the visitors' early lead was short-lived as the Dragons lock earned a measure of revenge, pouncing on a charge down to score.

Robling, who had been preferred to Blues-bound Jason Tovey at fly-half, added the conversion.

The visitors struck back when Richie Rees stole the ball from powerful centre Andy Tuilagi in a tackle before sending James racing in from 40 metres.

But Parks was unable to convert, leaving the hosts 10-8 ahead at the break.

Robling extended the home side's lead three minutes after the break with his second penalty and Parks soon responded to give the Blues the lead.

But having also missed several shots at goal, Parks saw Ben Blair take over the kicking duties and succeed with his attempt to leave the contest finely balanced.

The 53rd-minute replacement still had a lot to do, but he raced away before kicking head, juggling as he regathered under pressure from scrum-half Rees' tackle.

The former Lions wing held on to touch down to give the Dragons only a second win over the Blues in 11 meetings.