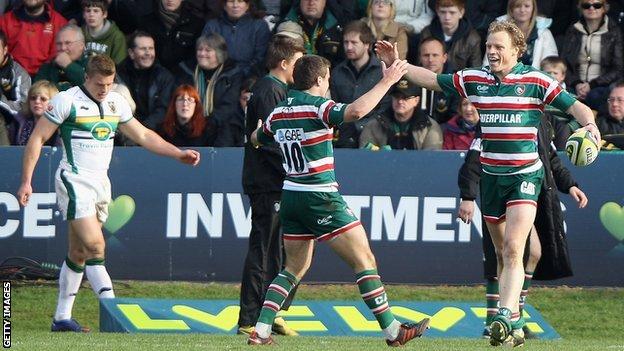 Steve Mafi scored the only try of the first half with teenage fly-half George Ford impressive with the boot as Tigers led 16-9 at the break.

Scott Hamilton ran the length of the pitch to extend their lead but the Tigers spent most of the final half hour defending their line brilliantly.

By the time Christian Day did cross for Saints, it was too little, too late.

Tigers director of rugby Richard Cockerill had said he would keep faith with the youngsters who had sent his side to the final, but opted to bring in some experienced players to face their East Midlands rivals.

The early stages were all Northampton's and Stephen Myler scored two penalties from distance to give them a 6-0 lead.

Leicester were massively struggling in the scrum, with Boris Stankovich at fault on more than one occasion for a collapse and he was replaced after 12 minutes by Marcos Ayerza with a calf injury.

One Tigers youngster to keep his place was fly-half Ford, who turned 19 on Friday, and he did not let Cockerill down, scoring his first two kicks of the afternoon to level the scores.

Saints went back ahead when Myler overcame the Worcestershire sun in his eyes to make it 9-6.

Leicester made another change in the scrum, with Tom Youngs coming on for Rob Hawkins and after breaking through from a scrum, they won a penalty which Ford converted to level it up.

Then came the opening try after 25 minutes, Billy Twelvetrees' break setting up the move and Mafi dodging Saints tackles to cross. Ford added two more points to make it 16-9.

Leicester could have considered themselves unlucky not to lead by more at the break as Martin Roberts denied Geordan Murphy, who looked set to pounce on his own kick through the defence to cross.

After the break, Saints pushed straight from the restart but failed to cross the line and Ford scored another penalty from distance.

Saints went again but George Pisi's brilliant jinking run ended up in a knock-on after he was tackled and then Scott Amstrong lost his footing when he looked through.

And perhaps the defining moment of the sold-out final came when Hamilton intercepted Myler's pass and ran 75 yards to touch down, with Ford's conversion making it 26-9.

The Tigers defence were magnificent throughout the second half and every time Saints looked destined to score, Leicester won the ball from a scrum or turned possession over near the line.

Vasily Artemyev knocked the ball on when he had a chance and then Soane Tonga'uiha found a gap but was barged out of play by fellow prop Logoviii Mulipola.

Leicester had Murphy yellow carded for conceding a series of penalties but their defence continued to hold firm, with Mafi tackling Armstrong in the corner.

With five minutes remaining, the Saints eventually got their try, with Day crossing in the corner after Pisi started the move.

But Ryan Lamb missed the conversion and Tigers never looked like throwing it away.

"I was delighted with the performance, delighted for some of those guys on the fringes that were playing in a big game for the first time.

"We were a bit fortunate with the interception taking us out of sight but I thought we were good for the win.

"There was some good grit and determination out there - we were under the cosh for the whole of the second half virtually but the attitude of the players has been outstanding for the last four or five weeks.

"It was a fierce game. I'm sure it was a great spectacle for the neutrals - if there were any in the stadium."

"Sometimes that happens [Myler's misplaced pass that led to Hamilton's try]. I think he saw someone coming out of the line and tried to get the pass over him.

"It just didn't happen for him. It's just unfortunate - I don't blame him for trying it.

"On our day we could easily have won that game, But it wasn't our day.

"If we had looked after the ball a bit better in the first half, we wouldn't have gone in seven points down."