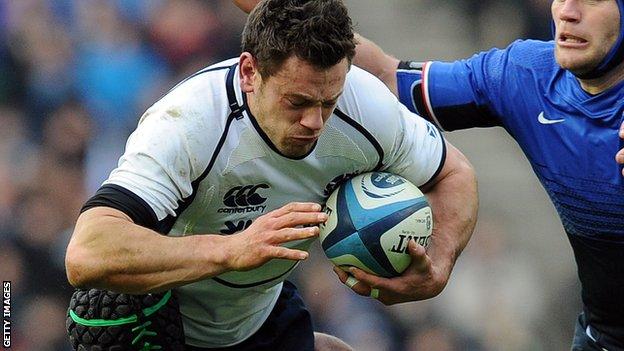 Centre Nick De Luca has been restored to the starting line-up in Scotland's only change for Saturday's Six Nations wooden spoon decider with Italy.

De Luca withdrew from the 32-14 defeat by Ireland after aggravating a hamstring problem in the warm-up.

The Edinburgh man comes in for wing Lee Jones, who suffered severe concussion in the defeat in Dublin.

Max Evans, who took De Luca's place in the team at the Aviva Stadium, has taken Jones's slot on the right wing.

The only other change in personnel in the matchday 22 sees Bath back Jack Cuthbert named among the replacements.

Scotland, who have lost all four Six Nations matches so far, are seeking a first win in Rome since 2006.

Cuthbert, who won his solitary cap in the World Cup warm-up Test against Ireland last August, takes the place of Edinburgh's Matt Scott, who was thrust on to the bench following the injury to De Luca and made his debut after Jones was taken off.

Head coach Andy Robinson said: "Nick was unfortunate to miss the game in Ireland and the challenge for him on Saturday will be to contribute as purposefully against the Italians as he did in his last game, against France."

"Jack has featured regularly for Bath this season. He's strong and we know from his involvement with the squad back in the summer how much it means to him to play for Scotland."

The pack is unchanged, with Geoff Cross retained at tighthead prop ahead of Euan Murray in an all-Edinburgh front row alongside captain and hooker Ross Ford and loosehead Allan Jacobsen.

Murray is named on the bench alongside replacement hooker Scott Lawson.

Richie Gray, Scotland's try-scorer in Dublin, is to combine again with Jim Hamilton in the second row, with former skipper Alastair Kellock again on the bench.

The back-row is comprised of John Barclay, Ross Rennie and David Denton, with replacement cover coming from Richie Vernon.

Scrum-half Mike Blair and fly-half Greig Laidlaw are to combine at half-back, with Glasgow combination Chris Cusiter and Ruaridh Jackson in reserve.

Graeme Morrison is inside De Luca in the midfield, while Evans is joined by Sean Lamont and full-back Stuart Hogg in the back three.

There had been concerns that Robinson, who is contracted until the 2015 World Cup, might resign if Scotland lose at Stadio Olimpico, thereby extending Scotland's run to seven straight losses for the first time since 1998.

However, the indications are that he is planning for the future, with former Ospreys coach Scott Johnson announced as senior assistant coach late last year and set to arrive for the summer tour.

Further coaching reform has emerged during the Six Nations, with news that defence coach Graham Steadman's contract will not be renewed.

Scottish Rugby this week confirmed Matt Taylor is to move from Queensland Reds, where he has been defence coach of the Super 15 side, to succeed Steadman and will also work with Glasgow Warriors.

The trip to Italy will also be Scotland attack coach Gregor Townsend's final game before he takes over as head coach at Glasgow Warriors, with incumbent Sean Lineen taking on a recruitment role.